The report's recommendation are incompatible with threats facing Israel, which have not decreased, but only changed, the defense minister said. 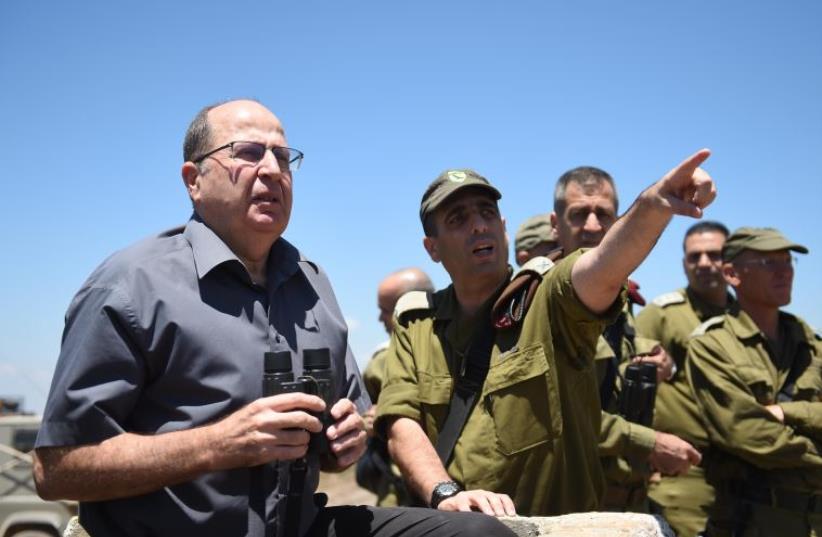 Defense Minister Moshe Ya'alon is briefed by IDF officers on the Golan Heights
(photo credit: DEFENSE MINISTRY)
Advertisement
Defense Minister Moshe Ya'alon described the Locker Commission's findings as "shallow, extremely unbalanced, and completely disconnected from the reality inside Israel around it."The report, he said, "if implemented, will be a gamble on the security of Israeli citizens. The idea of shortening service to two years is the result of a total misunderstanding of the military," he added, in scathing criticism. Ya'alon offered his full backing to the IDF's Gideon multi-year program as the correct way to deal with threats and challenges facing Israel. He said the Gideon program is "effective, balanced, and responsible. It is the one that should be adopted."Ya'alon added that "those who want to successfully deal, as we have don until now, with ISIS, Hamas, Hezbollah, Iran, and dozens of relentless terrorist organizations armed with advanced weapons, can't let themselves settle for a mediocre military with mediocre people. Unfortunately, the Locker report leads the state of Israel and its citizens to that place."
Yohanan Locker gives PM Netanyahu the national security budget report
The report's recommendation are incompatible with threats facing Israel, which have not decreased, but only changed, Ya'alon said. "Instead of the Syrian and Iraqi armies that fell apart, there are dozens of terror organizations that demand from the IDF a most advanced ability to deal with a number of arenas, unprecedented intelligence efforts in their innovation, advanced technology, and operational quality from the air force, navy, and ground forces," Ya'alon said. A well trained military backed by combat support units is needed to deal with this. The Gideon program would allow the IDF to continue with border security, allow for long-range operations, avoid harm to civilians, and continued research and acquisition of air defense systems, as well as cyber and other combat systems, Ya'alon argued. Ya'alon said the Locker Commission's recommendations on career soldiers were influenced by an "unprecedented, relentless campaign of incitement in their severity against them, in a way that could lead to the mass abandonment of good people, combat and combat support personnel, officers and non-commissioned officers, who feel humiliated."Ya'alon heavily criticized those who compare career soldiers to thieves raiding public funds and "turn them into enemies," saying they are acting in a disgraceful and irresponsible manner. "The fact that career soldiers are ashamed to walk the streets in uniform is a sign of shape, and it is the result of intolerable attacks on them," he said. "The IDF is making itself more efficient, and in actuality, there is no organization in Israel that works on efficiency in such a manner," Ya'alon stated.