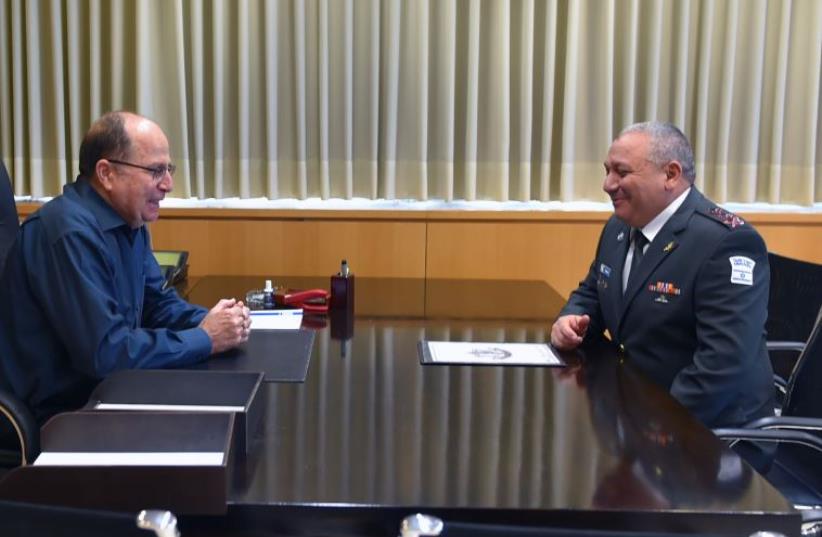 Former Defense Minister Moshe Ya'alon (L) in farewell meeting with IDF Chief-of-Staff Gadi Eizenkot- May 22, 2016
(photo credit: DEFENSE MINISTRY)
Advertisement
The IDF General Staff is a group of level- headed, responsible military leaders whose sound judgment enables Israel to thrive, former defense minister Moshe Ya’alon said on Sunday.His comments, in a farewell speech, stand in stark contrast to his description of the Likud Party and Israeli political leadership as being led by “dangerous extremists” in a resignation speech Friday.Ya’alon spent his final day at the Defense Ministry on Sunday holding farewell ceremonies with the General Staff forum and Defense Ministry personnel.He praised the General Staff, and thanked them “in the name of all the Israeli people,” adding: “You bring us a security reality that enables Israel to prosper. This forum can be proud of the achievements that brought Israel to relative security stability.”Ya’alon said the General Staff, under the leadership of Chief of Staff Lt.-Gen. Gadi Eisenkot, knows how to use force in “an intelligent manner.”“The threats have not ended, and hence, this forum will not be out of work in the coming years. But remember: A military must win, yet it also must remain human.Even after the battle, or operation, or war, we must safeguard our values and remain human beings. I trust you to continue to lead, and to win,” he said.On Saturday night, sources close to Ya’alon said he would “certainly” brief his presumptive successor, Avigdor Liberman, should the latter seek his advice upon taking up the position.Ya’alon, who was ousted as defense minister by Prime Minister Benjamin Netanyahu last week in favor of Liberman, rejected the idea of becoming foreign minister, and instead announced his resignation from government.In a statement he posted on his social media accounts last week, Ya’alon said he decided to leave “following the recent conduct” of Netanyahu, and “in light of my lack of faith in him.”