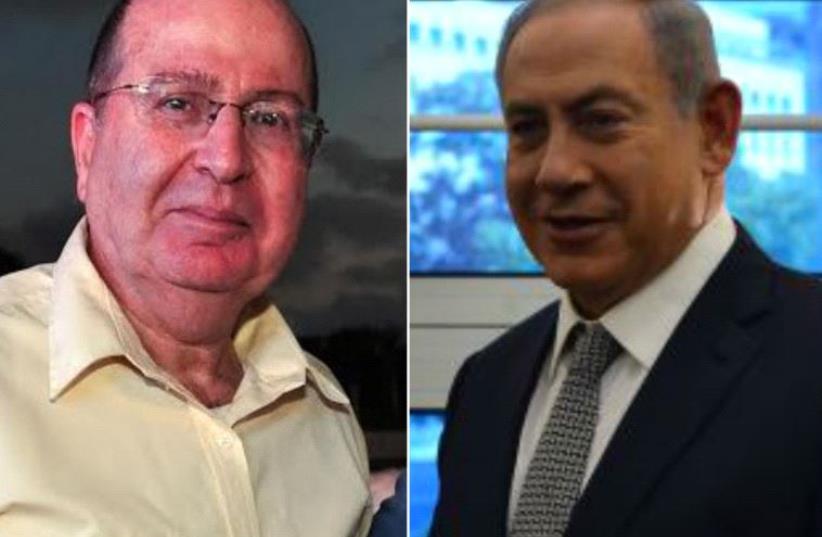 PM Benjamin Netanyahu and Former Defense Minister Moshe Yaalon
(photo credit: KOBI GIDEON/GPO,DEFENSE MINISTRY)
Advertisement
State Comptroller Joseph Shapira’s report on Operation Protective Edge became too political to be taken seriously, Moshe Ya’alon, who was defense minister at the time of the 2014 Gaza war, said in response to its release.Ya’alon, along with Prime Minister Benjamin Netanyahu and former IDF chief of staff Benny Gantz, faced sharp criticism in the report. Among those who fare best in the report is Bayit Yehudi leader Naftali Bennett, to whom Ya’alon referred in his response without mentioning his name.“The report evaluated partial aspects of a complicated operation,” Ya’alon said. “It ignores wider considerations because it fell hostage to the interests of politicians who fed the comptroller with false information that marred the examination.”Ya’alon said he had participated in Security Cabinets since 1995 and, of those, the Protective Edge cabinet was “the worst and most irresponsible.”“It was a shallow, political, populist Security Cabinet, with leaks, with talking for press releases, of saying one thing inside and another publicly,” he said. “This made the deliberations into a farce that without the prime minister, chief of general staff and I, could have led to a disaster.”Netanyahu, in response to the report, said the calm situation in the Gaza periphery since the operation was proof of its success. He said the IDF had made Hamas suffer the toughest blow in its history, assassinated 1,000 terrorists and destroyed thousands of rockets.“This quiet in the region is unprecedented since the 1967 Six Day War,” Netanyahu said. “The most significant and real lessons of Operation Protective Edge are already being implemented fundamentally, responsibly and quietly. These lessons are not in the comptroller’s report.”Politicians in the opposition did not call upon Netanyahu to quit. The only responses with practical ramifications came from Zionist Union MKs Omer Bar-Lev and Stav Shaffir, who called for a formal commission of inquiry to investigate the operation, and Zionist Union faction head Merav Michaeli, who asked Knesset Speaker Yuli Edelstein to summon Netanyahu for a special Knesset plenum session on the report.Yesh Atid leader Yair Lapid said Israel under Netanyahu was not ready for the operation and did not inform the Security Cabinet about the tunnel threat. Zionist Union leader Isaac Herzog said the public should be worried after Netanyahu’s failures were proven.Hitting back at the criticism he has faced in recent days, Shapira issued a statement Tuesday saying, “Those whose conduct were reviewed in the report know very well that the oversight was performed according to law, by a talented and professional staff, with integrity, meticulousness and zero bias. Despite this, the comptroller’s office and the comptroller himself have been found recently under attack and attempts at delegitimization, mostly from the political arena, in what appear to be attempts to deter the comptroller’s office and to harm its standing.”Pushing back at Netanyahu’s attempts to characterize him as anti-IDF, Shapira quoted from his report where he said, “The courage, resourcefulness and initiative of the commanders and the soldiers enabled the IDF to fight within the full scope of the Gaza Strip tunnels, to drive toward fulfilling their mission, to handle the tunnels to the best of their abilities, and to secure their accomplishments.”He emphasized that the most important thing was for those criticized in the report to take the criticism to heart and improve for the sake of the nation.President Reuven Rivlin defended the comptroller from criticism and called for Israel’s politicians to focus their energy on learning the report’s lessons and implementing them.