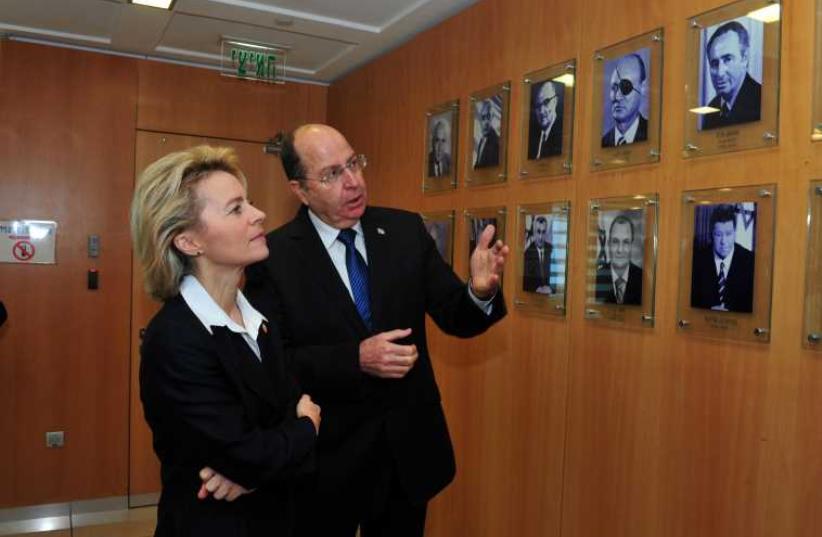 Defense Minister Ya'alon and German Defense Minister Ursula von der Leyen during her visit in 2014.
(photo credit: ARIEL HERMONI / DEFENSE MINISTRY)
Advertisement
Iran is intervening negatively in every conflict in the Middle East, and still strives to obtain nuclear weapons, Defense Minister Moshe Ya'alon told the visiting German Defense Minister, Ursula von der Leyen on Monday.Speaking at a press conference at the ministry in Tel Aviv, Ya'alon said , "Ursula, this is the third time we meet. During our past two visits as well, we spoke at length about the complex situation in the Middle East. During our conversation a short while ago, significant issues linked to the region arose. On most of the issues, we see eye to eye." The current chaotic period in the Middle East has seen the rise of a "rabble of extremist, relentless terror organizations that fight across the region, and are responsible, to our deep sorrow, for the killing of masses, including women, children, and the defenseless," Ya'alon said."Some of these terror organizations receive, unfortunately, assistance from the Iranian regime, which stops at nothing to promote instability, and intervenes negatively in every conflict in the region. This is a regime that openly declares its will wipe Israel from the map, and strives to develop nuclear weapons that will threaten the peace of the entire world," the defense minister warned. At the press conference, Ya'alon said that a recent attempt by terrorists to plant explosives on Israel's border with Syria on the Golan Heights was carried out by a cell that was activated by the Iranians. "The Iranian regime... continues to act with its charm offensive, headed by President Rouhani and Foreign Minister Zarif, and on the other hand, the Revolutionary Guards, in this case [Qassem] Suleimani, head of the Quds Force, continues to activate terrorism in Yemen, Lebanon, and to try and open a front against us on the Golan Heights.When these things happen, we of course act to defend ourselves," the defense minister said.Deep security cooperation is in place between Israel and Germany, Ya'alon said, based on a common view of threats facing the countries and threats facing the Western world, an exchange of information, and intimate relations between the two militaries and intelligence branches. "We are proud to share with you from our military and intelligence experience," Ya'alon said.He added, "We highly appreciate Germany's contribution to the security of the state of Israel and to the security of its citizens. The connections between the states is very helpful in building the IDF's power and consolidate it as an advanced and modern military." Ya'alon referred to Israel's acquisitions of four navy ships from Germany, saying it would significantly increase the nay's quality and ability to defend strategic assets. These ships are "the most advanced, and their acquisition will enable the Israel Navy to continue to stand in one line with the leading navies of the world." Von der Leyen arrived in Israel on an official state visit.The visit will be held under the banner of 50 years of diplomatic ties between the countries, Ya’alon’s bureau said in a statement on Sunday.The German defense minister will also visit the Yad Vashem Holocaust Museum in Jerusalem, and meet with injured IDF veterans and Holocaust survivors. She will then host a reception for defense officials from both countries on board a German frigate that is currently docking at Haifa navy base.Israel ordered three new-generation air independent propulsion (AIP) Dolphin class submarines from Germany, in addition to the three older German-made Dolphins in the navy’s possession.The INS Tanin, arrived in Israel’s Haifa navy base in September, and received weapons and communications systems from domestic defense companies. The fifth, the INS Rahav is expected to arrive in the coming months.