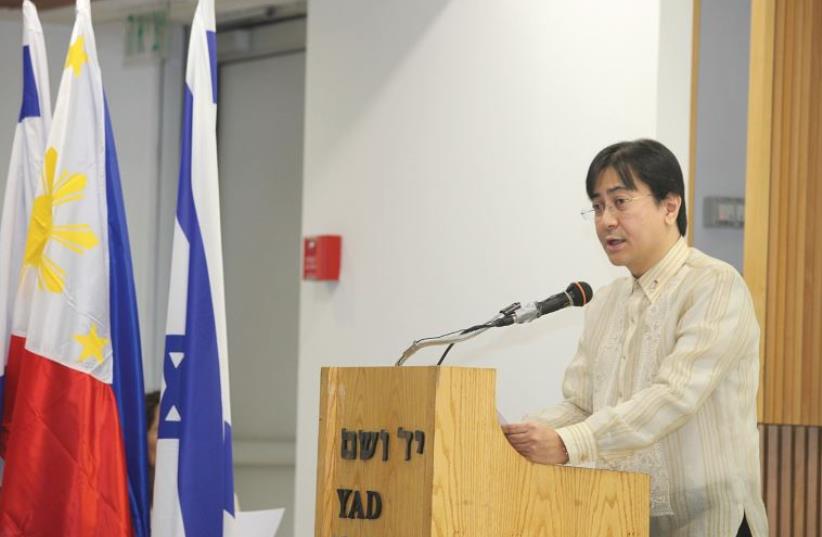 PHILIPPINE AMBASSADOR to Israel Nathaniel Imperial delivers an address at a Yad Vashem
(photo credit: ISAAC HARARI)
Advertisement
Recognition of the Righteous Among the Nations is one of the missions of Yad Vashem whereby it recognizes non-Jews who risked their lives to save Jews during the Holocaust.Unfortunately, if they only risked their careers and personal fortunes, but not their lives, it doesn’t count. This may explain why it has taken so long for Yad Vashem and the United States Holocaust Memorial Museum in Washington, DC, to give any recognition to the wartime president of the Philippines Manuel L. Quezon or to the Philippines as a nation.All that is changing. The wheels are grinding very slowly, but the remarkable story of the far-flung country that was one of the few that opened its doors to Jews fleeing from the Nazis is gaining attention both in the US and Israel, Philippines Ambassador Nathaniel G. Imperial said at a commemorative event at Yad Vashem on Tuesday.Perhaps because of the enormity of the brutality of the Japanese conquest of the Philippines, the noble story of the rescue of German and Austrian Jewish refugees was lost in the dust of history and vividly revived by two granddaughters of men in the extraordinary team that devised the rescue operation, which might never have come about were it not for the fact that all the key people involved were avid poker players.In addition to Quezon, they included the five Frieder brothers – Morris, Herbert, Philip, Henry and Alex – who owned a cigar business in Cincinnati, but who had initially gone to Manila to get tobacco from the Philippines, then purchased cigars and later set up their own cigar manufacturing concern.The other poker players were Paul McNutt, US high commissioner and former governor of Indiana, and an American colonel named Dwight Eisenhower, who was chief of staff to Gen. Douglas MacArthur, and who in January, 1953, became the 34th president of the US.Appalled by the Nuremberg Laws, which were introduced in 1935 and which stripped Jews of their German citizenship, making them refugees and outcasts in their own country, and aware that most countries were closing their doors to immigration and reducing their immigration quotas, the Frieder brothers devised a plan to rescue thousands of Jews. Because Quezon, McNutt and Eisenhower were all highly principled in matters of life and death, enlisting their cooperation was relatively easy. In fact, Quezon was prepared to not only take in many thousands of refugees, but to invite them to stay and help in the development of the Philippines.He was even willing to give them some of his own property. But in the final analysis, the visas provided by McNutt, because the Philippines was still to some extent an American protectorate, served only 1,200 refugees.The Filipinos, in general, were strictly opposed to the way the Nazis were treating the Jews and in response to Kristallnacht, held a huge rally in Manila to express their outrage.Yad Vashem senior historian and editor of Yad Vashem Studies David Silberklang admitted that prior to preparing a lecture for Tuesday’s event, he had known very little about the Philippines rescue operation, and although he had learned a lot in the interim, he knew that there was still much more to learn. Although the Philippines story is a small story in the overall saga of the Holocaust, Silberklang conceded, it becomes a big story in the context of the closed door attitudes by most other countries.Yossi Gvir, a member of the Yad Vashem directorate commented that most of the many events that take place at Yad Vashem are related to grief, anguish and murder, which are at the core of the Holocaust narrative, whereas Tuesday’s event was unique in that “the story we are recounting is an event of hope.” Like millions of other people, Quezon could have ignored what was happening and turned a blind eye, said Gvir, but he was a man of integrity and principle, and when called to make a choice, he made one that saved lives.Although some of the refugees have written books about the Philippines noble rescue of Jews, they have not reached a sufficiently wide audience. A gripping documentary film ‘Rescue in the Philippines: Refuge from the Holocaust’ was produced by two of the Frieder granddaughters, Barbara W. Sasser and Peggy J. Ellis, who interviewed some of the beneficiaries of Quezon’s compassion and interspersed the interviews with archive footage of Manila in the late 1930s and early 1940s. One of the interviewees, Margot Pins Kestenbaum, who now lives in Israel ,was present during the screening at Yad Vashem.Sasser said the rescue team, despite their religious and professional differences worked together to save Jews and “were up-standers as opposed to by-standers and took action to help.” The message is as relevant today as it was then, she said.She also noted that in 1947, the Philippines was the only Asian nation that voted in favor of the UN Partition Plan of Palestine.Her hope was that Yad Vashem and the Holocaust Museum in Washington would a way of including the Philippines among rescuing nations.Yad Vashem had not expected a particularly large attendance and had set out chairs for approximately one hundred people. However double that number showed up including ambassadors from Asia and the Pacific, Filipino nuns and priests, lay members of Israel’s Filipino community, relatives of the former refugees and representatives of the Ministries of Foreign Affairs and Tourism.The film has already been shown in the Presidential Palace in Manila and in various American states and has received extremely positive reviews.