The book was written by a prisoner in an internment camp in 1940.

By TAMARA ZIEVE
SEPTEMBER 28, 2017 18:02
Yom Kippur Machzor artifact from a concentration camp, 1941
(photo credit: COURTESY OF YAD VASHEM ARTIFACTS COLLECTION)
Advertisement
Ahead of the Day of Atonement, Israel’s Holocaust remembrance center is showcasing pages of a mimeographed copy of a Yom Kippur liturgy, handwritten by a prisoner of the Saint Cyprien internment camp in France in 1940.The two pages of prayers, which were uploaded to Yad Vashem’s online exhibition in recent days, were donated to its Artifacts Collection in 1973 by Martin Friedman, the son of Ludwig Friedmann – one of the group of Jews who prayed from the liturgy.Friedmann was a German refugee who had escaped to Belgium shortly before the outbreak of World War II. In May 1940, as the Germans were invading Belgium, Belgian authorities rounded up German and Austrian citizens, most of them Jews, and deported them to southern France in a train bearing signs that announced they were a “Fifth Column.”Martin Friedmann escaped the Holocaust on a kindertransport to Switzerland and today lives in the UK. When he donated the pages to Yad Vashem, little was known about the sender or the prayer book.But more than a decade of research has revealed many more details about the circumstances and people connected to the prayer book, Sara Shore, manager of the Artifacts Collection of Yad Vashem Museum, told The Jerusalem Post on Thursday.“All the information we had was that his father [Ludwig Friedmann] had been a German-born refugee who had been sent to a detention camp in France, and that it [the prayer book] was from Rosh Hashana and Yom Kippur at the end of 1940,” said Shore, who spearheaded the research. 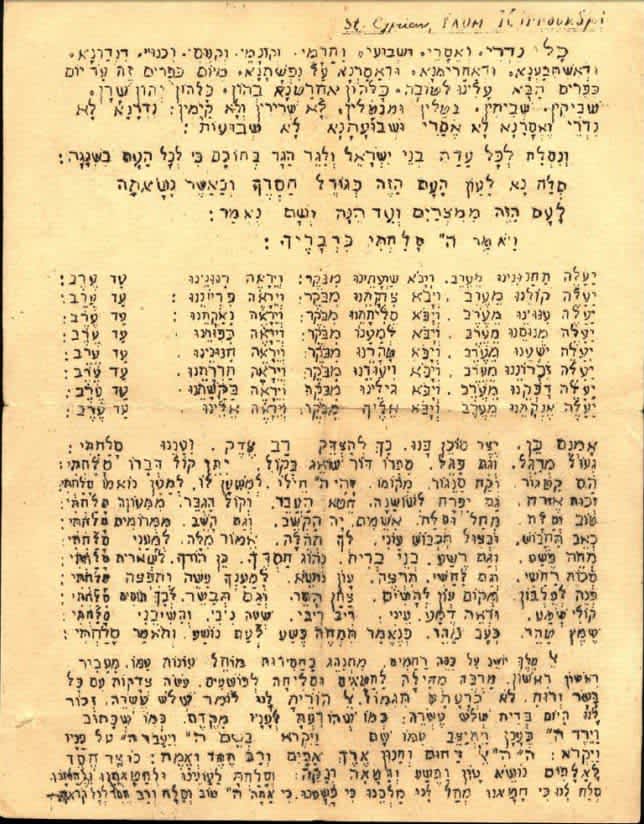 Yom Kippur machzor (Courtesy: Yad Vashem Artifacts Collection)
“But while we were computerizing the collection we went through each artifact, and I noticed a similarity between this and a Pesach Haggada we have which was in the same kind of format,” Shore explained.A mimeographed copy of the Haggada is preserved in the Artifacts Collection, and on the inside cover there is an illustration depicting Rabbi Leo Ansbacher giving a sermon during the Yizkor service (memorial prayer for the departed) on the last day of Passover. The handwriting of the Saint Cyprien Yom Kippur prayers is identical to the handwriting of the Haggada that was written by Louis Zuckerman.A testimony by Ansbacher, a German refugee deported from Belgium to the camp, relates how they put together a Passover Haggada. He also describes the prayers held in the camp for the New Year: “There on the earth of St. Cyprien, what stands out as unforgettable was Rosh Hashana [the Jewish New Year 5701 – on the 3rd and 4th of October, 1940]. On that holiday morning we stood under a clear sky, thousands of people sharing a single fate, a simple choir led the congregation, then the ‘sermon.’ At that moment we all prayed as if from one soul, one voice rose to God from a thousand hearts. Those that took part thought of that and much more on that morning in October.”The abbreviated Yom Kippur machzor contains Kol Nidre and the main parts of the service. “The French were running the camp and there was still a certain amount of cooperation with the French Jewish community... so they were able to organize Jewish life there for a time,” Shore said. “They obviously worked hard to have some form of community life.”The text of the online exhibition states: “The pages of prayers are tangible evidence of the efforts of camp prisoners to cling to their traditions, as a means of finding solace and spiritual fortitude in the appalling physical conditions of the French internment camps.”By Sukkot, on October 16, 1940, the camp was flooded and the prisoners were sent to the Gurs camp, where the spiritual leaders of the Jews continued organizing social and religious activities. Ansbacher and others associated with him became part of an official committee, the CCA – Comité Central d’Assistance – that oversaw care for the sick, education, religious life and Torah study. On Shabbat and holidays there were communal prayers, and often the rabbi gave comforting sermons. Among those active in the CCA were Mordecai Ansbacher – brother of the rabbi, Dr. Pinchas Rothschild and Louis Zuckerman, acquaintances from before the war.Arieh Zuckerman, the son of Louis Zuckerman and a child Holocaust survivor, moved to Israel in the late 1950s and today lives in Jerusalem. One of Arieh Zuckerman’s great-grandchildren and a great-grandchild of one of the Ansbacher brothers got married a few years ago, according to Shore.