Yellow-and-blue closing in on league title 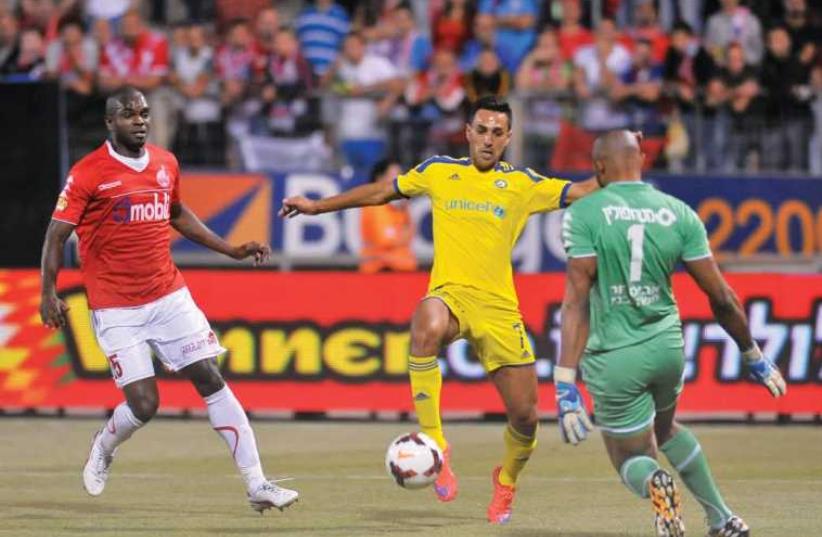 Maccabi Tel Aviv’s midfielder Eran Zehavi and Hapoel Beersheba’s goalkeeper Austin Ejide
(photo credit: ASAF KLIGER)
Advertisement
Maccabi Tel Aviv can clinch a third straight Premier League championship with a victory over Ironi Kiryat Shmona next Sunday, despite seeing its winless streak on the road reach seven matches with Monday’s 1-1 draw against Hapoel Beersheba at Vasermil Stadium.Maccabi hasn’t won away from Bloomfield Stadium since defeating Ashdod SC 1-0 in January, but it still looks to have the league title all but wrapped up. Monday’s draw moved it six points clear of Ironi Kiryat Shmona and kept it eight points ahead of Beersheba with three matches to play, meaning a win on Sunday will officially give the yellow-andblue the title.Nosa Igiebor handed Maccabi the lead in the 26th minute of Monday’s encounter, which was a preview of next week’s State Cup final, thanks to Nikola Mitrovic’s delightful assist. Tal Ben-Haim should have doubled Maccabi’s advantage four minutes from the interval, but after rounding goalkeeper Austin Ejide he had his shot denied on the line by a last-ditch Ben Biton lunge.Beersheba dominated the second half and netted a deserved equalizer through Ovidiu Hoban in the 67th minute. However, it couldn’t score a winner and remained in third place in the standings.“We didn’t deserve more than a draw,” admitted Maccabi coach Pako Ayestaran, who will be without Igiebor and Dor Peretz in the cup final after they picked up yellow cards on Monday. “You have to take your chances and we could have led 2-0 in the first half and that would have changed the game.”Elsewhere Monday, Hapoel Acre capped its great escape from relegation with a fourth straight victory, beating Maccabi Netanya 2-1 and sending Hapoel Petah Tikva back to the National League after a single year in the top flight.Petah Tikva defeated Ashdod SC 4-2 on Saturday to maintain a lingering hope of survival, but had won just two of its previous 19 matches and was demoted despite bringing in coach Menahem Koretzki in place of Idan Bar-On in February.Acre occupied the foot of the standings for much of the season, spending more than five straight months in the relegation zone during one stretch.Less than three months ago, Acre was in last place, 10 points from safety after winning just two of its first 23 matches.It seemed that the signing of coach Shlomi Dora in place of Alon Harazi in January was making little difference, but the team caught fire in recent months, winning six of its last nine games, including its past four, to climb out of the relegation zone and secure its survival with one match to spare.Branislav Jovanovic (6) gave Acre an early lead in Netanya, which was canceled out by Eran Levy (33). Greek midfielder Yiannis Papadopoulos moved Acre back in front eight minutes into the second half and the visitors were delirious at the final whistle.“I never dreamed we would be able to stay up with one match to spare when I joined the team,” said Dora.“I believed we could survive, but certainly not with a game to play. The players and fans deserve every credit and this club has something about it that it finds a way to survive.”