"In order to counter BDS most effectively, you have to reclaim the narrative of liberalism," says expert.

Anti-Israel demonstrators march behind a banner of the BDS organization in Marseille, June 13.
(photo credit: GEORGES ROBERT / AFP)
Advertisement
As the BDS movement and other anti-Israel propaganda continue to gain traction on college campuses around the world, young Jewish leaders are increasingly becoming the most important first line of defense in an intellectual war defined by dueling narratives.To help train them, Neil Lazarus, a Middle East politics and public diplomacy expert specializing in countering BDS arguments, met with roughly 40 participants in the Masa-GLI Leadership Development Initiative in Jerusalem on Wednesday.Lazarus, the director of awesomeseminars.com, and author of “The New 5 Rules of Effective Israel Advocacy,” said that he uses his seminars to train the next generation of Israeli diplomats and spokespeople.“What we are looking at is a way of reassessing how to challenge and debate BDS,” said Lazarus, who contends that Jews and Israel are winning the battle for hearts and minds, despite appearances to the contrary.“BDS proponents are very good at declaring successes, but the reality is that legislation has been brought in to stop it at campuses, which are not welcoming them. But we do have our hot spots at universities in the US, Canada and Britain.”Additionally, Lazarus said academic boycotts of Israel have become popular at numerous campuses. 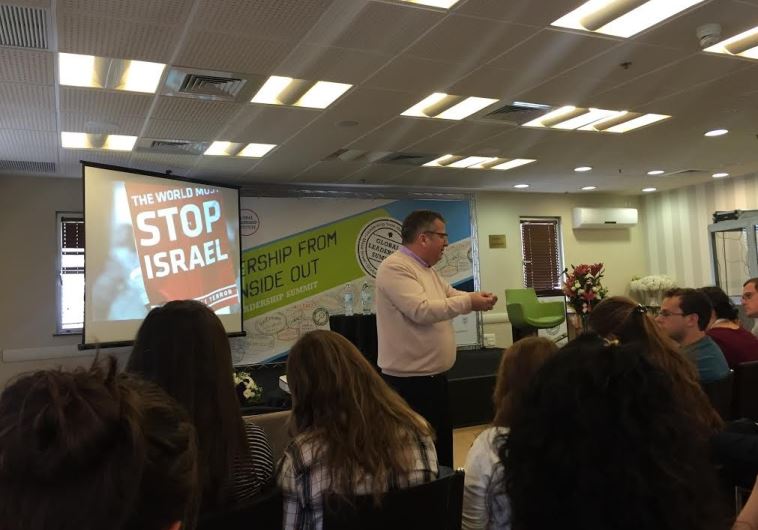 (Neil Lazarus teaches students from the Masa-GLI Leadership Development Initiative in Jerusalem how to effectively counter BDS proponents. Credit: Courtesy) “The key message I try to get across is that we need to change the way that we talk about BDS,” he continued.“Traditional advocacy to combat BDS has always approached it from the Right – that BDS is anti-Semitic, that boycotts remind us of the Holocaust – and what I am claiming is that is a language which doesn’t really work.”In order to win hearts and minds in the war against BDS, he noted, “we have to be able to address the issues coming from the liberal narrative.”“The brilliance of BDS is that it attracts people who are legitimately critical of the government policy, and see no other way of expressing that criticism other than boycotting,” he said. “To counter BDS most effectively, you have to reclaim the narrative of liberalism.”That narrative, Lazarus contends, generally embodies social justice, gay rights advocacy, and feminism.“I think that traditionally, many Jews have come from a liberal background, and traditional advocates for Israel generally come from the right-wing, religious perspective, and they are clueless on how to deal with [the BDS] audience.”Effectively neutralizing BDS’s core arguments, Lazarus said, requires skillfully reclaiming the liberal narrative it espouses. “They need to speak a language that is understandable to a left-wing audience to show there is a contradiction between their value system and beliefs; that if you are a liberal, you have to be against BDS, because BDS is against co-existence and negotiations,” he said.“Number one, before they open their mouths they have to reassess themselves on what Israel is to them,” he said of participants at his seminars. “In other words, you can’t advocate for Israel unless you understand what it means to you, including the criticism.”“Second of all, if [BDS proponents] are in favor of a two-state solution, a two-state solution can only come when there is dialogue and negotiation, and BDS calls for the boycotting of Israel and the breaking of those ties,” he continued.In that respect, Lazarus said the Peres Center for Peace is an excellent model for countering BDS by promoting coexistence between Israelis and Palestinians.Meanwhile, just as important as negating BDS’s polarizing arguments, he asserted, is how vocally one responds to them.“It’s important to be aware not to shout too loudly,” he said. “I have a feeling that sometimes we shout too loudly about BDS, and we give them more strength than they actually deserve.”By “not shouting too loudly,” Lazarus said he means being judicious about acknowledging every salvo against Israel.“For example, when the National Union of Students in Britain recently came out supporting BDS, the prime minister of Israel commented on it, saying how bad it was,” he explained.“The next day what people didn’t see was that in another debate about BDS, BDS said, ‘Look, we are having an effect; even the prime minister of Israel noted the ban.’ So, sometimes we are empowering the enemy, so we have to think strategically.”Ultimately, Lazarus said it must be made clear that BDS contradicts the goal of peace by “moving against dialogue, and strengthening the Right in Israel.”“If, at the end of the day, there will be peace between Israelis and Palestinians on a grassroots level, it has to come by dialogue and negotiation, and economic boycotts affect Palestinians as well as Israelis,” he said.“We should be building bridges, not walls.”Masa participant Ethan Kahn, who graduated from the University of Cincinnati last year, said the most valuable lesson he learned from Lazarus was to “push and to question the concept of BDS itself.”“Neil encouraged us to challenge it by pushing the boundaries on all sides of the story and become well educated,” Kahn said, noting that he did not personally encounter BDS activities on campus, or anti-Semitism.Charles Lack, who graduated from SUNY Plattsburgh in New York in 2014, said Lazarus taught him the importance of creating a constructive dialogue with BDS proponents, instead of attempting to silence them.“The most important thing is you need to create a dialogue about Arabs and Israelis, and BDS is nothing more than propaganda and does not want peace, but wants to create a single state for Palestine,” he said.“The best way to create a dialogue is to discuss co-existence, and that is exactly what BDS does not do,” he continued.“It claims to create change in the Israeli/Arab conflict by giving rights to Palestinians, but what it actually does is create propaganda and does not facilitate dialogue.”
Advertisement
Subscribe for our daily newsletter