Netanyahu said that Israel hopes to “deepen its cooperation with [Zambia], which I think is important for both our countries and both our peoples." 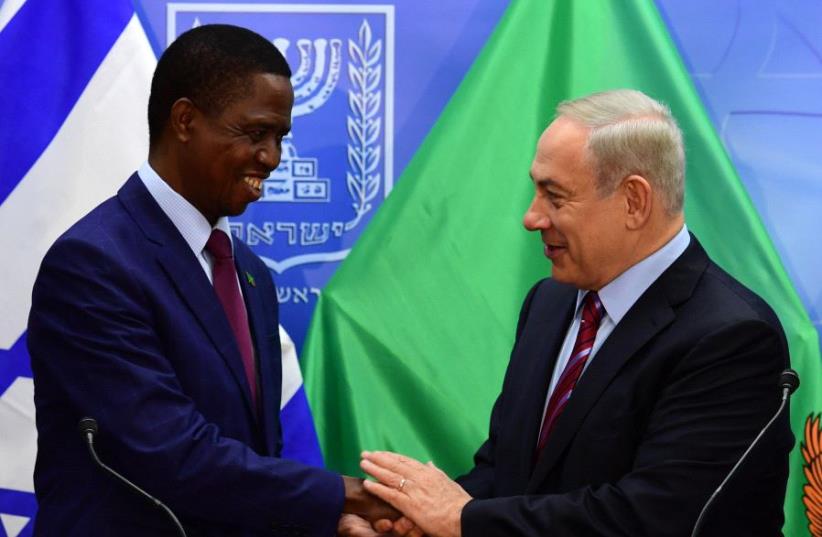 Israel Prime minister Benjamin Netanyahu and President of Zambia Edgar Chagwa Lungu.
(photo credit: GOVERNMENT PRESS OFFICE)
Advertisement
Prime Minister Benjamin Netanyahu on Tuesday asked visiting Zambian leader Edgar Lungu to help Israel regain its observer status at the African Union, a position it lost in 2002 and has had trouble regaining, primarily because of the objection of South Africa and the North African Muslim states.The Palestinian Authority enjoys this status in the pan-African body, and as a result Palestinian Authority President Mahmoud Abbas is able each year to address the annual summit, something denied to Israel.Lungu, one of the seven African leaders Netanyahu met at a three-hour summit in Uganda in July, arrived on Monday for a five-day visit. He arrived here with a bevy of government ministers, including his ministers for foreign affairs, agriculture, trade, energy, tourism, water development and environment, transportation, health, and industry and employment.In an interview with The Zambia Daily Mail, he said that Zambia stands to reap substantial benefits from the visit.“Israel is a pace-setter in survival instinct, because it has a desert; but they have a thriving education, agriculture and information and communication technology sectors and we can explore and learn from them. A lot of benefits are expected out of this trip,” he said.Zambia is one of the few African countries with a military attache in Israel. It opened an embassy here in 2015. Israel does not have an embassy in Zambia.Netanyahu said after meeting Lungu that his country “has undergone an amazing and admirable change in a transition to democracy since the ‘90s.”He said that Israel hopes to “deepen its cooperation with the country, which I think is important for both our countries and both our peoples. I know that you’re opening a Jewish history museum in Zambia and soon a synagogue in the capital city. I hope one day I have the opportunity to visit those institutions and to visit Zambia.”At its peak, some 1,000 Jews lived in Zambia, though that number has dwindled to only about 30 today. There are three Jewish cemeteries in the country.Lungu is the latest in a long list of African leaders who have visited Israel over the past year, including the presidents of Kenya, Sierra Leone and Togo, the prime minister of Swaziland, the deputy prime minister of Ethiopia, and the foreign ministers of Rwanda, Ghana and the Ivory Coast. In addition, Netanyahu met representatives of some 15 African states on the sidelines of the UN General Assembly meeting in September.Netanyahu is scheduled to attend a summit with the leaders of more than a dozen African states in Togo in the Fall.