Al-Qaida may use refugee influx to infiltrate Israel

Netanyahu says barrier needed along Egyptian border to keep out terrorists, drug smugglers, illegal migrants; but construction may take up to 3 years.

By HERB KEINON
JANUARY 22, 2010 05:17
sudanese refugees IDF 311
(photo credit: AP)
Advertisement
If the border with Egypt is not closed, then al-Qaida may use Sudanese refugees making their way into the country as cover to infiltrate and set up terrorist cells in Israel, senior IDF officials told Prime Minister Binyamin Netanyahu during a tour on Thursday of two observation posts along the Sinai border.Netanyahu went to take a look at the border some two weeks after announcing that a physical barrier needed to be built there, and two weeks before the initiative is to come before the cabinet for approval.Building an effective barrier along the 240 km. border with Egypt is expected to cost NIS 1.3 billion and to be completed in two to three years.During the tour, the prime minister - accompanied by Deputy Chief of General Staff Maj.-Gen. Benny Gantz and OC Southern Command Maj.-Gen. Yoav Galant - was briefed on the porous nature of the border, and told that the most frightening scenario was al-Qaida enlisting some of the estimated 2 million Sudanese refugees in Egypt to infiltrate Israel and set up terrorist cells. 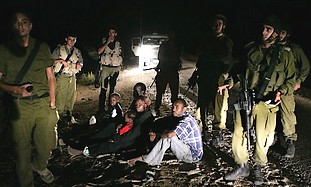 A Sudanese family caught by the IDF on the border
Netanyahu's first stop was at Mount Sagi, in the southwestern Negev on the border with Egypt."We cannot allow ourselves not to build the barrier," he said, looking down at Egypt and a large Beduin encampment which is a center of smuggling in the area. The barrier was needed to keep out terrorists, drug smugglers and illegal migrants, he said.Netanyahu said that he discussed the matter with the Egyptians when he visited Cairo earlier this month, and that the Egyptians did not voice any opposition."We need to do what we need to do," he said. "They have no objections."While it was impossible to hermetically seal the border, it would be possible to significantly cut down on the smuggling, the prime minister said."There is no fence without a hole in it," Netanyahu said, quoting a commander from his days in the General Staff's Sayeret Matkal commando unit. "But if you complement it with technological devices, you can clog most of the holes."He was told that last year some 5,000 people, 160 kg. of heroin, and 1.1 tons of hash were smuggled into Israel through the 200-km. stretch of border that the IDF position on Mount Sagi is responsible for. The smugglers receive $2,000 for each person brought across the border.At Mount Sagi a number of members of the mixed male-and-female Karakal infantry unit that is responsible for the border surprised the prime minister by popping up from their camouflaged position just below where he was speaking, to demonstrate how they wait for smugglers."It is a different army," Netanyahu said, talking to a number of women, their faces smeared with camouflage paint, who took part in the exercise.He also saw an exhibit of various methods used by the smugglers to cover up their tracks, from using leaf blowers to deposit sand over their footprints, to special shoes that leave no mark.Netanyahu said that, because of the topography, there are areas where it is not necessary to build a physical fence, but rather what is needed is to deploy more advanced technological surveillance means. However, he said, in some areas, such as a 40-km. stretch south of Gaza, a physical barrier would definitely be erected.The IDF would decide where a physical fence needs to be built, and there is currently debate within the army over whether a fence is needed around Eilat, or whether the mountainous topography provided sufficient protection, he said.At another outpost Netanyahu visited, about 10 km. south of Gaza, IDF officers told him that around 3,000 people were smuggled through a 60-km. stretch from Gaza southward last year. Fewer than 1 percent, he was told, get through a 10-km. stretch that has been closed in with a rudimentary fence.The Egyptians often shoot those trying to sneak into Israel, and he was shown a film clip of one such case.
Advertisement
Subscribe for our daily newsletter