'Barak has more chutzpa than PM'

Kadima slams defense minister as he testifies at Turkel C'tee.

By JPOST.COM STAFF
AUGUST 10, 2010 13:52
Barak Turkel 311
(photo credit: Marc Israel Sellem)
Advertisement
Defense Minister Ehud Barak has more "chutzpa" than Prime Minister Binyamin Netanyahu and has "no shame in passing on the responsibility of his failures onto those that wear the uniforms," the Kadima spokesperson charged Tuesday.The statement came after Barak testified at the Turkel Committee probe into the IDF raid on a Turkish ship trying to break the Gaza blockade on May 31.RELATED:
Analysis: Committees are one thing...
Opinion: Is the Turkel Commission the end of Goldstone?'Flotilla probes are out of line'

"Day after day the public sees its government pass on responsibility, hesitate and look for those that are guilty of the complications it gets itself into," the statement read.Barak said as he entered the panel session to testify that he "bears all responsibility for what happens in the IDF and full responsibility for military instructions that were given during the flotilla raid."

"The decision to stop the flotilla was made after a thorough examination of the options available by the prime minister and the Septet," Barak stressed. 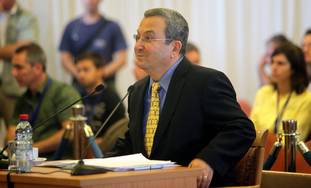 Barak testifies at the Turkel Committee
The defense minister said "concrete intelligence information was presented during a military briefing.""During the military briefing [IDF Chief of General Staff] Lt.-Gen. Gabi Ashkenazi reiterated his concerns over the conduct of the world media if force was used to stop the flotilla, however, he said that it wont be easy but we will do it," Barak commented.Barak said that the orders for the flotilla raid were formulated in accordance with all the relevant government offices."We have an excellent army, chief of staff and soldiers," Barak stated.Barak also mentioned other flotillas that were planning on arriving in Gaza and said that "Israel is fighting for its right to exist in one of the toughest corners of the world."The defense minister echoed a similar stance as Prime Minister Binyamin Netanyahu, who a day earlier said he had left Barak in charge of the matter before flying to North America for diplomatic meetings.The IDF raid on a Turkish ship trying to break the Gaza blockade, during which nine Turks were killed, took place while Netanyahu was in Canada for meetings with Canadian Prime Minister Stephen Harper. Netanyahu was scheduled to meet US President Barack Obama the next day in Washington.Asked by committee chairman Jacob Turkel, a retired Supreme Court justice, whether his absence from the country had any impact on how the crisis was managed, Netanyahu, toward the end of his testimony, said he gave clear directives before he left that Barak would be in charge of the issue “in all of its aspects.”“We anticipated not only the IDF operation to stop the ship, but also the international problem, and I asked the defense minister to coordinate the entire matter,” Netanyahu said.Netanyahu was the first witness to appear before the committee, and his testimony was divided into two parts: a 90-minute public session, which began with a prepared statement followed by a number of questions from the committee, and an hour-long session behind closed doors. On a number of occasions during the public session, specifically addressing relations with Turkey, Egypt and the US, Netanyahu requested that his testimony be given on camera.Opposition head MK Tzipi Livni reacted to Barak and Netanyahu's appearance at the committee by saying that the basic qualities to be a leader include the ability to do what is right for Israel."A leader must be able to explain the reasons, considerations and motivations of their decisions," Livni added.Livni noted that "the nation hears the opinions and sees the hesitations of the government leaders."Barak was in contact with Turkish FM prior to flotillaDiplomatic efforts were directed toward the UN and those countries whose citizens were participating in the flotilla or whose docks were being used by the ships, including Egypt, Greece, Cyprus, Ireland, Britain and, “first and foremost, Turkey itself.” Netanyahu said his office had been in direct contact with the highest level of the Turkish government, and that Barak had been in contact with Turkish Foreign Minister Ahmet Davutoglu, whom the defense minister has known for years.Netanyahu said Israel did not hear any public message from the Turkish government to tamp down the “fervor” of the IHH activists on the Mavi Marmara, the vessel on which the nine activists were killed.
“Apparently, the Turkish government did not see the possible friction between the Turkish activists and Israel as anything that ran contrary to its interests, and certainly nothing that justified using effective pressure against the IHH activists,” he said. “Despite our continuous diplomatic efforts, ultimately the Turkish government did not prevent the attempt by the Marmara to violate the naval blockade. It appears that (Turkey) did not see in the prospect of a clash between Turkish activists and Israel something that clashed with its interests.”Netanyahu said that 14 days prior to the flotilla, Turkish Prime Minister Recep Tayyip Erdogan met with Iranian President Mahmoud Ahmadinejad and their Brazilian counterpart for a public declaration on a deal to transfer Iranian uranium abroad that was contrary to the position of the US and the other permanent members of the UN Security Council.“Turkey thereby strengthened its identification and cooperation with Iran just days before the flotilla,” he said.Netanyahu added that not only did the IHH activists not try to find a way out of a confrontation, they declared they were looking for it, that they wanted to break the blockade and that the Jews “needed to return to Auschwitz.”Herb Keinon, Abe Selig and Gil Hoffman contributed to this report.
Advertisement
Subscribe for our daily newsletter