'Equipment not in shortage in Gaza'

Flotilla aid examined, sent to strip; 'Marmara' not inspected yet.

By RON FRIEDMAN
JUNE 1, 2010 22:00
greek ship flotilla ashdod 311
(photo credit: Ron Friedman)
Advertisement
Twenty-four hours after the last ship of the Gaza aid flotilla entered the Ashdod Port under the watchful eye of the Israeli Navy, all of the equipment on board was examined Tuesday and the majority of it was loaded onto trucks headed to the Kerem Shalom border crossing. The flotilla’s flagship, the Marmara - where the clash between Israeli commandoes and the passengers took place and which held the participant’s personal belongings - had yet to be fully inspected.In a statement to reporters at the port on Tuesday, Colonel Moshe Levi, commander of the IDF’s Gaza Strip Coordination and Liaison Administration (CLA), said that none of the equipment found on board the three cargo ships was in shortage in Gaza.“We have been working non-stop for the last twenty-four hours examining the cargo holds of the three large cargo ships and I can say with great assurance, that none of the equipment on board is needed in Gaza. The equipment that we found is all equipment that we have regularly allowed into the strip over the past year,” said Levi. “This proves beyond a shadow of a doubt that the whole premise of the voyage was for propaganda and provocation and not for humanitarian purposes.” 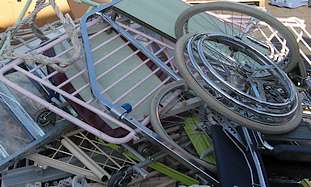 style="text-decoration: underline; font-weight: bold">RELATED:
What is the IHH?
'Next time we'll use more force'
Israeli gov't defends flotilla raid
2 terrorists killed on Gaza border
Mossad: Israel becoming less of a strategic asset for USMajor David Elmaliach, also from the Gaza CLA, said that no guns, rockets or explosives were found on any of the ships.The three ships were docked at the Ashdod port, gaurded by IDF soldiers and port security personnel.Among the equipment that the IDF agreed to show reporters were medical supplies, including electric vehicles for handicapped people, wheelchairs, stretchers, hospital beds and boxes of medicine. They also showed crates full of dry food products and children’s toys. 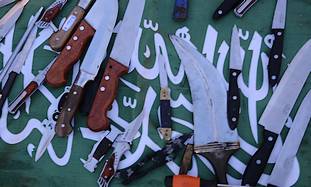 Levi said that eight trucks full of equipment had already crossed into Gaza and that 20 additional trucks would be transferred throughout the night and the following day.Defense official: Cargo did not meet international standardsAccording to Levi, the soldiers also found construction equipment, including sacks of concrete and metal rods. He said that Israel did not allow those products to enter into the Gaza strip for fear that they would be used to construct fortifications for terrorists and for weapons manufacture.Gidi Gofer, head of the Defense Ministry’s international transport division, said that the equipment that arrived in the cargo ships did not have proper transport manifests or any of the paperwork required to legally ship cargo by sea. “The cargo did not meet international safety or operational standards,” said Gofer.Gofer explained that his job was to oversee the security inspection of the cargo and his team was doing it with the aid of bomb squads, explosive-detecting dogs and x-ray machines. “We are currently liaising with the Palestinian Authority so that they will receive the approved equipment according to the agreed upon procedures,” said Gofer. “The illegal construction materials were removed from the ships and will be held by us awaiting further instructions.”Ashdod Port CEO Shuki Sagis said that the port authorities were prepared to accept the ships in advance of their arrival and under the military supervision, began unloading it on Monday evening.“The cargo ships were loaded haphazardly, with all of the equipment mixed up in the large holds. Ships loaded in this way would not be accepted in any port. We are loading the equipment on the trucks far more carefully than it was loaded on to the ships,” he said.
Advertisement
Subscribe for our daily newsletter