By RON FRIEDMAN
JANUARY 18, 2010 07:52
Uzi Landau 248 88 aj
(photo credit: Ariel Jerozolimski)
Advertisement
National Infrastructure Minister Uzi Landau returned Sunday from a weekendin the United Arab Emirates, where he attended the International RenewableEnergy Agency (IRENA) conference, a new international body based in Abu Dhabi.
Landau is the first Israeli minister to visit the small, oil-rich country inthe . and the UAE do not have diplomatic relations, but IRENA's activities are opento because it is a member state.
Speaking to The Jerusalem Post, Landau said that he and the rest ofthe Israeli delegation were restricted to the hotel and the conference grounds,but that he saw the city while driving to and from the airport and he hopedthat in the future, there would be a permanent Israeli representative in thecity functioning as a liaison with IRENA.
"In order to break through the ice, you need to start with a crack. Ithink my visit may have been a first splinter," said Landau.
A small, lower-level Israeli delegation attended the previous IRENAconference in in October, and was received graciously.
IRENA was officially established in on
January 26, 2009. It aspires to become the main driving force for promoting arapid transition towards the widespread use of renewable energy on a globalscale. As of today, 138 states and the European Union have signed the Statuteof the Agency. The weekend conference was the third session of the agency'spreparatory commission.
In his speech before the agency's members, Landau called on therepresentatives of all the other countries to cooperate for a better future.
"Despite the special problems that each country experiences and despitethe differences and disagreements that arise between the countries representedhere, together, we arrived at an agreement regarding the existence of a globalproblem that affects and threatens all of our future," he said.
Landau offered to share 'sexperience in water technology and invited the participants 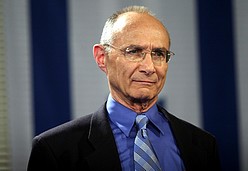 to attend theEilat-Eilot Renewable Energy International Conference, scheduled formid-February.
"We in ,during the last 60 years, have made the desert bloom. We have the willingnessto share and contribute from our experience to those who share our problems….The fact that we are here, in the heart of the Gulf, the source of fossil fuelsand are talking about alternative energies, is proof that we are together, thatwe can, that it is in our power to create a new, greener reality for outchildren."
"The importance of the organization is great," said Landau in aphone interview. "There are plans, especially by the Europeans, to promoteinternational actions through the agency. It will be an important junction forresearch, business and development of national systems."
Landau said that the organization's charter was not complete yet and that itwas still early to talk about a permanent Israeli presence in the UAE, but hesaid that once everything was up and running there would need to be some sortof professional delegate to the agency and that with time, and depending on theactivity required, it may grow to a team.
Landau said the UAE was committed to allowing Israelis to enter, despite thelack of diplomatic ties, because of the nature of the organization.
"They had to do it, since they committed themselves to making itpossible for all member states, with or without relations, to participate inthe agency's activities," said Landau.
An official with the UAE's Foreign Ministry told The Associated Press that"allowing an Israeli cabinet minister to participate in the agency'sactivities was part of obligations in hosting [the agency] in the UAE."
He added that 'sparticipation in the international event would have no implications orindications for bilateral links between the UAE and any other party.
AP contributed to this report.
Advertisement
Subscribe for our daily newsletter