A senior commander, helped lay the foundations of the IDF and also conceived and established the Merkava tank project. 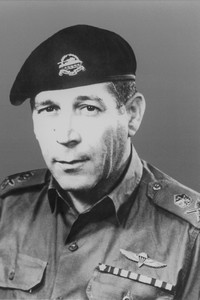 Born in 1924 and raised in Beer Tuvi, Tal helped lay the foundations of the IDF and held a series of important posts in the course of an illustrious military career, leaving the army as deputy chief of staff. He will be laid to rest on Sunday. He is survived by his wife, Hagit, and son, Yair.Chief of General Staff Lt.-Gen. Gabi Ashkenazi, the forum of the general staff, senior commanders, regular and reserve soldiers all saluted Tal for his work, legacy, and contribution to the security of Israel over the many years."The image of a legendary warrior and commander, who helped lay the foundations of the IDF armored corp and developed the Merkava tank, one of the world's best tanks, has left us this morning," Ashkenazi said. "Talik, as everyone called him, belonged to the founding generation of the IDF, in which the security of the state of Israel, protecting its borders and the peace of its citizens was his objective from the beginning of his lifetime to his last day," explained the chief of staff. "Talik wrote the golden pages of the magnificent, but bloody, history of Israeli security. His personal and unique contribution to the defense of Israel cannot be measured. May his memory be blessed."Tal, known to foreign experts as "Mr. Armor," was the seventh commander of the armored corps between the years of 1964 and 1969. He was in charge of designing and producing the Merkava tank, the IDF's main battle tank. Hebrew for "chariot," it is widely seen as one of the best of its time. The tank was created to ensure the safety of its crew by placing the engine at the front, allowing crew and medics to enter and exit from behind, even under fire. The Merkava tank entered combat in the 1980s.

Tal's mastery of long-range tank fire tactics are widely seen as key to the Israeli break through of the Egyptian Suez Canal on the Sinai peninsula during the 1967 Six Day war where he served as an armored division commander. In 1972, he was called to service by then chief of general staff David Elazar to serve as head of the military operations branch and as deputy chief of staff. He became the commander of the southern front during the surprise Egyptian and Syrian attack against in the 1973 Yom Kippur war. In 1974, he finished his military service and served as a security consultant to Shimon Peres. In 1978, Tal returned to service and developed a new organizational plan, the establishment of a field forces command.Tal was named one of the top five armored commanders in history at The Patton Museum of Cavalry and Armor in Fort Knox, Kentucky, along with IDF Maj.-Gen. Moshe Peled, US General George S. Patton, US Gen. Creighton Abrams and German Field Marshal Erwin Rommel.
Advertisement
Subscribe for our daily newsletter