Israel Factor: is a Republican Congress better for Israel?

The panel thinks GOP-ruled congress will favor Israel, but aren't happy – some want the checks and balances to also be applied to Israeli policies.

By SHMUEL ROSNER
NOVEMBER 14, 2010 21:30
Israelfactor 311
(photo credit: Courtesy)
Advertisement
Over four years ago, when I started The Israel Factor survey (what’s The Israel Factor? You’ll have to read the introduction if you don’t know), our panel was the first to identify the problem the then candidate Barack Obama had with Israelis. On the first survey we did, Obama came the least favorable candidate in the eyes of our Israeli experts – a fact that Obama campaign advisors later acknowledged, after reading The Factor.Obama never overcame the suspicions of the panel. They debated who was better – John McCain or Hillary Clinton – but never looked at Obama as a candidate that would be a staunch Israeli ally. In January of 2009 another round of The Factor was launched, asking for the panel's assessment of Obama's policies on Iran (click here) and the Palestinians (click here). The panel predicted some pressure on the illegal outposts, and also (rightly) predicted that the Obama administration would try to reach a peace deal between Israelis and Palestinians during Obama’s first term in office. It was probably too optimistic in assessing the Obama-Netanyahu relations – as you can see here.RELATED:
Livni: It's stupid to think a weak Obama helps Israel
Jewish leaders: Political shift won't affect ME policy
Poll results from the Israel Factor's new panel Today, we are re-launching The Israel Factor, with somewhat different panel (but not much different), and with much more friendly presentation. The Factor’s page will be improved in coming weeks and months and is going to include some interesting features, and hopefully some surprises. For now, though, our immediate concern was to have the panel give us - and the readers - a sense of what the panelists thought on the eve of the 2010 midterm elections. You can see the questions we’ve asked here, and the numbers here – but these numbers need explanation, and we’re here to explain.But first, a word of caution: As the introduction explains, The Factor can be somewhat problematic. In many cases, when we ask whether a candidate is “good” or “bad” for Israel, the answer depends on ones political beliefs and strategic viewpoint. One of the panelists, former Consul General Alon Pinkas, was blunt when he asked me last week: “Define ‘Good’ or ‘Bad’ for Israel? Define ‘Get along with Netanyahu’? Define Bobby Jindal's position on Israel? Sarah Palin's? How can you possibly rate the likelihood of US ‘Asking Israel to evacuate settlements’? In what context? Peace? Out of the blue?”These are all good questions, but I can’t and shouldn’t answer them. The way The Factor always worked – and its predictions were pretty interesting and many times on the mark – was to leave many questions open to interpretation. The panel – each panelist – decides for themselves what’s “good” or “bad." Our hope is that having different people with different viewpoints, who are all knowledgeable and experienced on US-Israel issues, will give as some sense of the way Israelis see things. The way they see the candidates, the administration, the relations and the policies. Of course, this isn’t a poll of Israelis. It is a survey of eight people. Which makes it not as good if one wants to know exactly what most Israelis think, but makes it better by eliminating the views of the people who have no clue. And on many of the questions we are asking most Israelis have no clue (nor should they have one).Having said all that, it is time for analysis, and on the morning after Election Day the questions most relevant for analysis tell us three things:1.     Generally speaking, the panel believes that it is better for Israel that Republicans won the day. Some believe that the best combination for Israel would be if they could have won both houses, and some think it is better that only the House went Republican. Again, a word of caution is needed: This doesn’t necessarily mean that the panel thinks Republicans are better than Democrats on Israel (some do, others don’t). It means that they think that for Israel, it is better when there’s a US government that is split. Why? That’s quite obvious: Because it makes it more difficult for the administration to pursue policies without checks and balances. 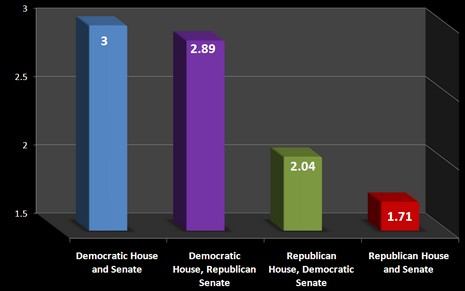 At present, which combination will be better for Israel – rank the options (1 through 4):2.     Clearly, though, the panel believes that the more Republican is Congress, the more convenient it is for the Netanyahu government. Not all panelists are happy about this – some would want the checks and the balances to also be applied to the Israeli policies. Those panelists ranked differently the two questions on Congress.3.     As you can see in the numbers page, our panel is pretty balanced in the sense that there’s no clear preference for one of the parties among its members. Some panelists tend to prefer Democrats, other think Republicans are better for Israel – and the final outcome gives no party clear advantage over the other (the marks are the average of what all panelists say). In this sense, one wonders whether this panel is really representative of Israel’s general public opinion.However, on one thing our Israeli experts seem clear: they are very suspicious of the Tea Party movement. I must say here, though, that not all panelists filled the rubric on the Tea Party – some felt it was too early for them to asses what the movement means for Israel. However, most of the panelists did answer the question, and were clearly feeling uncomfortable with the movement. The two I asked for explanation gave me similar answer: Fear of isolationist tendencies. 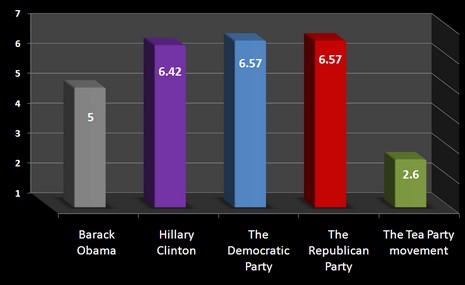 From 1 (bad for Israel) to 10 (good for Israel): Generally speaking, please rate the following people and institutions:
One last point, related to the third conclusion. From the very wide field of prospective Republican candidates for 2012, our panel rated Ron Paul (the isolationist) the least favorable – and that isn’t surprising. But it had also rated the darling of the Tea Party movement, Sarah Palin, fairly low. Is it because the panelists think she also suffers from isolationist tendencies? I think not. It is because they believe Palin isn’t up to the job, and doesn’t have the ability to deal with the complicated world and the complicated region in which our panelists reside.To be continued…