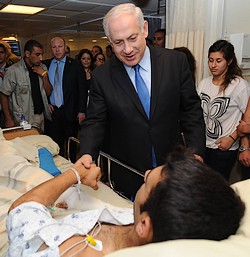 instead on the phone on Monday, with Obama conveying his understanding Netanyahu’s decision to return immediately to Israel from Canada and not stop in Washington following Monday's flotilla raid.RELATED:
Erdogan calls raid 'a massacre'
Navy threatens to use more force next time
Ahmadinejad calls IDF commandos 'rabid dogs'
Gaza protester stabs himself in Malaysia
600 activists held in Beersheba jailLater on Monday, Netanyahu spoke with British Prime Minister David Cameron, who according to a British Embassy statement "deplored the heavy loss of life off the coast of Gaza" and "reiterated the UK's strong commitment to Israel's security."However, Cameron urged Israel "to respond constructively to legitimate criticism of its actions, and to do everything possible to avoid a repeat of this unacceptable situation." He also called for the Gaza blockade to be lifted in order to allow passage of humanitarian aid.Lieberman slams int'l community's 'hypocrisy, double standards'Several ministers also voiced reactions to the flotilla raid Monday and Tuesday. Foreign Minister Avigdor Lieberman discussed the incident with counterparts 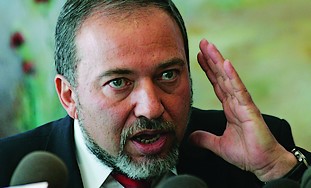 from various countries, among them UN Secretary-General Ban Ki-moon, EU High Representative for Foreign Affairs Catherine Ashton and German Foreign Minister Guido Westerwelle.In his discussion with Ban on Tuesday, Lieberman stated that while 500 people were killed in violent incidents around the world in May alone, it was Israel that was being condemned - and for defensive actions.The two spoke following Tuesday morning's Security Council resolution calling for an impartial investigation of the matter, as well as Ban's request for a "thorough investigation" of the incident.Lieberman stated that the hypocrisy and double standards taking root in the international community regarding Israel were to be regretted, stressing that Monday's raid was a reflection of the rights of IDF soldiers to defend themselves against attack. The activists on board the ships, he said, had prepared clubs, metal crowbars and knives in advance of the confrontation - obviously intending to take a strike at Israel's sovereignty. He added that in light of these facts, Tuesday's Security Council resolution was unacceptable.'Distinguish between terrorists and freedom fighters'On Monday, Lieberman told Ashton and Westerwelle to adopt an objective approach and make the distinction between "freedom fighters" and terrorist supporters like those who had been aboard the ships. Lieberman told the two foreign ministers that though Israel had tried to conduct dialogue with the organizers of the flotilla days before the ships neared Israeli territorial waters, such overtures were rejected - as was a request by Israel that the organizers ask Hamas to allow Red Cross visitation for captured IDF soldier Gilad Schalit."What happened ... was pre-planned violence, and Israeli does not intend to allow any attack on its sovereignty by groups of terror-supporters and anarchists," read a Foreign Ministry press release.Livni: It's impossible to directly compare Israel, HamasKadima and opposition leader Tzipi Livni, meanwhile, expressed full confidence Tuesday in the "principles" of Israel's soldiers, which "remain unchanging even when they join the IDF ... and even when they take over a ship and are attacked and beaten almost to death on board."Livni criticized the world's response to the incident, saying it was impossible to make a direct comparison between Israel and Hamas. "I understand the personal pain that is expressed concerning the incidents that occurred here, but there is not one democracy in the world that can generate a comparison between murderers and those who defend themselves or kill without intending to.""Israel and Hamas are not two sides of the same equation," she stressed. Finance Minister Yuval Steinitz said on Tuesday that in seizing the provocative flotilla heading to Gaza, the IDF acted with determination and courage. He added that Israel exercised restraint - sometimes too much restraint."Israel is a small country and needs to protect itself and there was no other alternative than to defend ourselves," said Steinitz at a ministry conference in Jerusalem on Tuesday. "It is clear that the real mission of the flotilla was not to transfer humanitarian aid, which could have entered through the border crossings at the Ashdod port. Instead, the real mission was to break the naval siege to Gaza. The water siege is not perfect, but [it is] essential. It is necessary to understand that a breakage of the siege would mean an increase in terrorism and rockets against Israeli citizens. We don't have a choice, if our country needs to protect lives, we must defend ourselves."Steinitz added that the State of Israel last year transferred 1 millions tons of food and equipment to Gaza.Hilary Leila Krieger and Sharon Wrobel contributed to this report.
Advertisement
Subscribe for our daily newsletter