'Terrorist was a PA officer'

Soldier sitting in jeep stabbed, crashes vehicle as he tries to escape.

By YAAKOV KATZ
FEBRUARY 11, 2010 03:50
Tapuah attack 311
(photo credit: AP)
Advertisement
A Palestinian Authority police officer stabbed and killed an IDF non-commissioned officer on Wednesday who was sitting in a military jeep in a traffic jam near the Tapuah junction in Samaria.The soldier, St.-Sgt. Maj. Ihab Khatib, 26, from the mostly Druse village of Maghar in the Galilee and a member of the Kfir Brigade, was on his way from Jenin to a military outpost near the junction, located on Road 60, the main north-south highway in the West Bank. 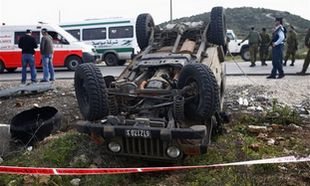 Khatib was sitting in his Sufa jeep with the window open when the PA police officer, who was wearing civilian clothes and was later identified as Muhammad Hatib, approached, pulled out a knife and thrust it into Khatib’s chest. Khatib tried to escape by pressing down on the gas pedal, eventually flipping over in his jeep on the side of the road.Yossi Margalit, a security officer for the Rehalim settlement who was nearby, rammed his car into the terrorist, lightly wounding him. He was apprehended by soldiers and handed over to the Shin Bet (Israel Security Agency) for questioning.IDF sources said it appeared Hatib had acted alone and had lain in wait for a military target, since he had waited on the side of the road when he could have attacked Israelis at a nearby hitchhiking post.Khatib is survived by parents and five siblings. Several years ago, his uncle was killed in action while serving in the army and during the Second Lebanon War, his aunt was killed when a Katyusha rocket fired by Hizbullah hit her house. 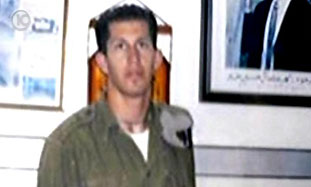 IDF sources said the attacker was the head of bureau for the PA’s Ramallah police chief. IDF sources said that the PA police were trained by a European Union organization, based in Ramallah, called the EUPOL COPPS (the EU Police Co-ordinating Office for Palestinian Police Support).EUPOL COPPS representatives were unavailable for comment.Brig.-Gen. Yoav Mordechai, head of the Civil Administration of Judea and Samaria, spoke with senior PA officials and updated them on the attack. The Palestinians told Mordechai that they planned to conduct their own independent investigation into the incident.Palestinian Authority Prime Minister Salam Fayyad denounced the attack and said it “conflicts with our national interests.” He pledged to take steps to prevent such incidents in the future, while endorsing “peaceful resistance” against settlements and the security barrier.Reacting to the stabbing, one government source said on Wednesday night that while the PA had made marked improvements in its security apparatus, as Israel has repeatedly said in public, “they still have serious challenges, one of them being the ability to deal with their own Fatah people.”The source said that while it was “easy” for the PA security apparatus to go after Hamas and Islamic Jihad activists who were threatening the PA’s rule in the West Bank, they were much more hesitant in tackling the extremists in their own security apparatus or movement.The source said that another example of this was December 24’s murder of Meir Chai, a 45-year-old father of seven, in a drive-by shooting attack near the northern Samaria settlement of Shavei Shomron. Chai was the fourth person killed by terrorists in the West Bank in 2009.In March, two traffic policemen – Senior Warrant Officer Yehezkel Ramazreger and Chief Warrant Officer David Rabinovitch – were shot dead in the Jordan Valley, and in April, 13-year-old Shlomo Nativ was stabbed to death near his home in the Gush Etzion settlement of Bat Ayin.“This attack comes amid an increase in terror attacks,” Samaria Brigade commander Col. Itzhik Bar said on Wednesday. “Since the beginning of 2010, IDF troops have prevented 20 stabbing attacks and uncovered 12 bombs.”Military sources said that there was no requirement to wear a bulletproof vest while driving on Road 60. “Each road in the West Bank has its restrictions, but not Road 60, which is a main highway,” one officer explained.The attack, the officer said, was likely not perpetrated by an established terrorist cell but rather fell into the category which the IDF calls “lone attackers.”“These are attacks that are extremely difficult to prevent, since there is usually no intelligence indicating that it is going to happen,” the officer said. The attack was unlikely to have an effect on continued Israeli-PA security cooperation.The IDF has recently warned of growing “popular
resistance” in the West Bank, particularly at the Friday demonstrations against the West Bank security barrier near Bi’lin and Ni’lin, which are conducted with the PA’s support and funding.The Council of Jewish Communities of Judea,
Samaria and the Gaza Strip said the attack was the direct consequence of the government’s “pathetic” attempt to strengthen Palestinian Authority President Mahmoud Abbas by easing security measures in hopes that he would returning to the negotiating table.“This has cost us in blood,” the council said.The Binyamin and Samaria Citizens’ Committee
blasted Defense Minister Ehud Barak in a media statement.“It’s no small wonder that when the defense minister is busy implementing the racist settlement construction freeze and with vain arrests of settlers, the terrorists and their accomplices are celebrating. Today, the settlement freeze monitors visited Kfar Tapuah while the terror attack took place right under their noses.”Margalit, the security officer from Rehalim, said he saw the Palestinian attack the soldier but was not immediately aware that Khatib had been stabbed. “He tried to get away from me, I knocked him down with my car, and I took control of him,” he said of the attacker.“The moment I saw security guarding him, I approached the Israeli who was hurt.To my distress, he was seriously injured in his chest. As an activeparamedic, I treated him and removed him from the car, and prepared himto be taken to the hospital,” Margalit said.“There are thosewho are saying ‘hero of the day’ and things like that. I don’t think ofmyself like that. To my sorrow the outcome is an Israeli was killed; anincident that happened near my home in a place where people pass everyday.”Herb Keinon, Tovah Lazaroff and Ben Spier contributed to this report.
Advertisement
Subscribe for our daily newsletter