'US to ensure no provocations'

Abbas, ahead of Mitchell talks: Israel gave us no assurances on J’lem.

By KHALED ABU TOAMEH
MAY 7, 2010 02:40
Abbas Mitchell 311
(photo credit: Associated Press)
Advertisement
The US has assured the Palestinians there will be no “acts ofprovocation” by any party during the indirect talks between the PA andIsrael next week, Palestinian Authority President Mahmoud Abbas said onThursday.“The Americans stressed that neither party would be allowed to takemeasures or provocations that would harm the negotiations,” Abbas toldthe London-based pan-Arab daily Asharq Al-Awsatnewspaper. “We relayed the US statement as it is to the ArabLeague meeting, which approved the launching of the indirect talks.”The PA understood that acts of “provocation” include settlementconstruction by Israel and incitement by the Palestinians, he said.Abbas’s comments were published on a day when US envoy George Mitchellmet for the second time in 24-hours with Prime Minister BinyaminNetanyahu. The talks are taking place amid an almost total newsblackout, with neither side releasing any information about thediscussions.RELATED
Analysis: Proximity’s silver lining?
Landau: PA already planning breakdown of proximitytalks
Abbas gives talks four months 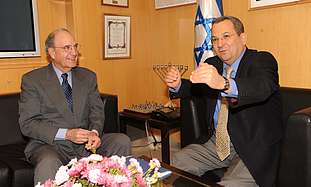 Mitchell is expected to meet with Abbas on Friday and Saturday, before leaving the region on Sunday.Abbas admitted that the PA did not receive any specific assurancesregarding construction in Jewish neighborhoods in east Jerusalem. Healso denied that Israel had promised to release Palestinian prisonersahead of the talks.Asked about the growing tensions between Fatah and Prime Minister SalamFayyad’s PA government, Abbas said, “Fatah members have the right tosay whatever they want. They have the right to like or hate SalamFayyad. This is a large faction with different opinions. But at the endof the day this is my government. I choose the government and itimplements my policy.”Abbas reiterated his opposition to Fayyad’s plan to unilaterallydeclare a Palestinian state by August 2011. He said that he and Fatahwere opposed to the plan because the declaration should be made throughan agreement (with Israel).Abbas also launched a scathing attack on Hamas, saying there were no real differences between the Islamist movement and Fatah.“Hamas says it’s against the firing of rockets and is talking about aPalestinian state within the 1967 borders,” the PA president noted. “Sowhat’s the difference between us and them? There is no difference. Thisis no longer an ideological or political issue.”He said Hamas was smuggling weapons into the West Bank while it waspunishing Palestinians who fire rockets from the Gaza Strip. “Every daywe seize [Hamas weapons],” he said.Abbas said that despite the crisis, Fatah and Hamas were continuing tosearch for ways to achieve reconciliation. However, “outside forces” (areference to Iran and Syria) did not want a solution to the Hamas-Fatahdispute.Herb Keinon contributed to this report.
Advertisement
Subscribe for our daily newsletter