All-female Friends of the IDF delegation finds inspiration in Israel

The nonprofit group raises tens of millions of dollars each year for the IDF, including its Lone Soldiers Program. 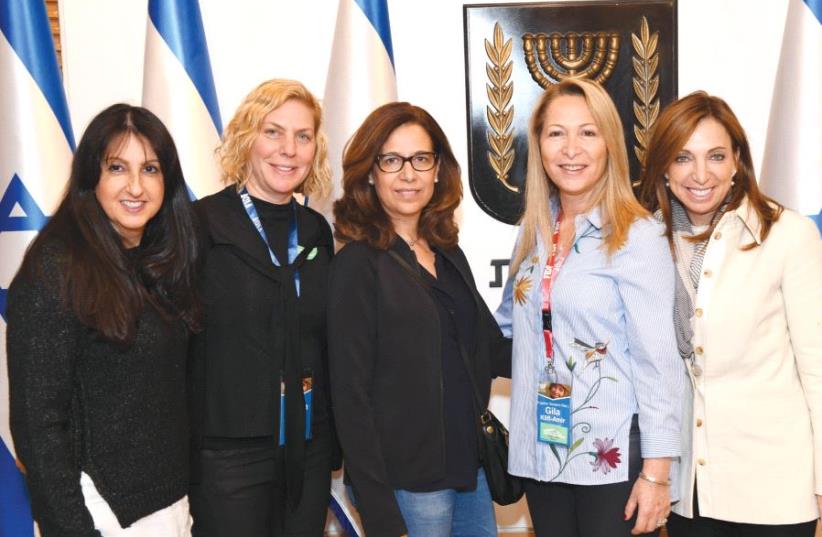 MEMBERS OF an all-female delegation of the Friends of the IDF, who visited Israel for International Women’s Day, pose for a picture. From left: Sylvia Stark, Sharon Miskin, Rachel Fine, retired Brig.-Gen. Gila Klifi-Amir and Marcy Gringlas.
(photo credit: SHAHAR AZRAN)
Advertisement
A 32-strong all-female delegation of US donors and community leaders of Friends of the IDF experienced female empowerment firsthand on a trip to Israel for International Women’s Day.The nonprofit group raises tens of millions of dollars each year for the IDF, including its Lone Soldiers Program.FIDF delegate Dr. Marcy Gringlas has a personal connection to the Lone Soldiers Program.“As the daughter of Holocaust survivors, I was extremely moved when my daughter decided to serve in the IDF [as a lone soldier],” she said. “It was not an easy decision, especially since she was already 28. We couldn’t be more proud of her for helping to protect the Jewish people, fulfilling my father’s dream, and creating a new legacy for our family.”“I first became an FIDF supporter seven years ago after traveling to Auschwitz on a FIDF trip with my father, an Auschwitz survivor,” Gringlas said.FIDF delegate Rachel Fine also has a child who is a lone soldier. Fine, who grew up in Israel and settled in the US with her American husband, herself served in the IDF many years ago.“I’ve never stopped feeling like Israel is my true home and will always remain so,” she said. “I still love my country and my people with all my heart. I truly believe that there is nothing more important than supporting Israeli soldiers.”“We’ve raised our three sons to love the Land of Israel, and we’ve been FIDF supporters for many years,” Fine said. “We love visiting army bases, and for each bar mitzva, we adopted a different IDF unit.”FIDF delegate Sylvia Stark, whose husband, Arthur, is chairman of the FIDF, has two sons who served as lone soldiers in the Paratroopers Brigade.“My personal experience of having my boys serve in the IDF has given me a deeper understanding of what families go through every day when their children are serving in the IDF,” she said. “For Israelis, it’s normal when your children go into the army, but for us it was very different. We were pretty surprised when our son told us he’d decided to go into the IDF. We just wanted to make sure he understood the risks he was taking.”During their visit, the FIDF delegation met with Likud MK Anat Berko, Inbal Kreiss, a senior engineer at Israel Aerospace Industries, members of Forum Dvorah: Women in National Security and Foreign Policy, female IDF commanders and other women who have challenged the status quo.Delegation cochair, retired Brig.-Gen. Gila Klifi-Amir, offered a personal example of the achievements that women have made in traditionally male fields.In her 30-year military career, she was promoted several times to positions that had previously never been filled by women, the last of which was as women’s affairs adviser to the chief of staff.“I took it upon myself to travel to various branches of the FIDF throughout the US and tell them what it’s like for women who decide to make a career of their service in the IDF,” Klifi-Amir said. “Jewish American women were eager to hear how I managed to balance family and work and how Israeli society views women in the IDF.”