Canaan canines: Leaving on a one-way ticket to Italy 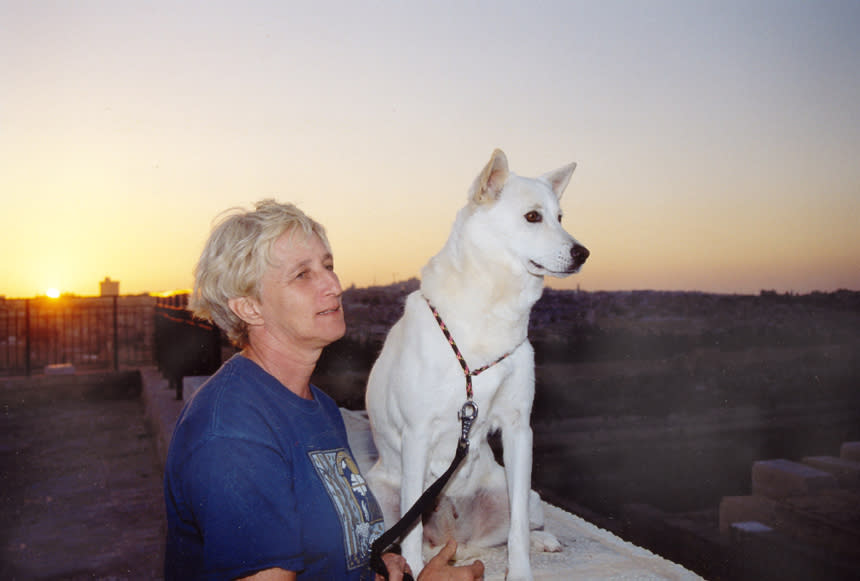 Myrna Shiboleth with one of her prize Canaans
THE STORY BEHIND THE EVICTION
In 1970, together with D'vora Ben- Shaul, other friends and their dogs, Myrna Shiboleth moved into long abandoned buildings built by the British during the time of the mandate following World War I. The beige stone buildings originally housed the workers and engineers who ran the nearby water pumping station (a red British post box is still on the site.) "When we moved in the buildings were in a state of total ruin, the ceilings collapsed, and everything was full of sheep droppings from the Beduin who had passed through and camped over the years," Myrna recalls.They slowly renovated the houses and cleaned up the property, building fences and kennels. They spent the first several months without water and 17 years without electricity. The group signed a lease with Mekorot (the national water company) believing it was the owner of the property.In 1980, Mekorot refused to extend the lease and told the residents they had to vacate the property. In subsequent court hearings it turned out that the Israel Land Authority (ILA) and not Mekorot, was the actual owner of the land.According to Shiboleth, they asked repeatedly for a lease so they could stay on legally over the next 30 years, but never got a response, despite paying local property taxes. When the ILA finally decided to evict the residents in 2011, the Sha'ar HaGai Kennels became the focal point of a four-year legal battle. Despite the kennel’s longtime existence on the site, a statement from the ILA stressed that “the land is owned by the State of Israel.”“These are trespassers who took over state lands and six historical buildings in Sha’ar Hagai, a national park in which residences were prohibited,” the ILA's unusually harsh statement read. “This is a criminal offense punishable by up to two years in prison.”During the legal proceedings Myrna and her famous kennels became a cause célèbre, both in Israel and internationally, for people concerned about the continuation of the Canaan breed. An on-line petition protesting the eviction garnered 40,000 signatures, but in the end Myrna and the other residents lost their case and subsequent appeal against the eviction.The ILA refused to pay any compensation.Last summer, the ILA razed the modest house Shiboleth had lived in for four and a half decades. In order to prevent anyone else from entering the buildings, once everyone is evicted, the ILA intends to raze all the structures on the site, even though some have been designated formally as historic buildings. (The Jerusalem branch of the Council for the Conservation of Heritage Sites in Israel is looking into the matter.) Bizarrely, the highway planning division recently built a new turnoff to the site and erected official signs.Sha'ar HaGai is not alone. In recent years the ILA has launched a country- wide campaign to evict people living on state lands, regardless of the circumstances or investments of the residents. In many cases, precise ownership and legal status of the property is muddled, but the residents inevitably lose their appeal."There's no such thing as having formal rights to live in a place that's been designated state land," admits attorney Yaacov Amster, a real estate lawyer who represented Shiboleth. "She lost because she didn't have rights. It's true that for years they tried to obtain legal status and were ignored, but if you pitch a tent in a field and sit there for 10 years, it's still not going to be your property." Asked if he'd take on a similar case were he approached, Amster replied, "Yes, just to drive them crazy, because I believe in justice in these situations. It would have been so simple to come to these people and say, 'you've lived here for many years, you've invested in developing the land, you have a strong connection, you're not bothering anyone, let's establish a legal status,' "continues Amster."It's just cruelty, people with a narrow outlook, a stupid state that can't see the benefits."
Advertisement
Subscribe for our daily newsletter