Lebanon: Teetering on the edge

No one has yet found the way to mesh communal and civic identities in a way that will enable Lebanon to survive and prosper. 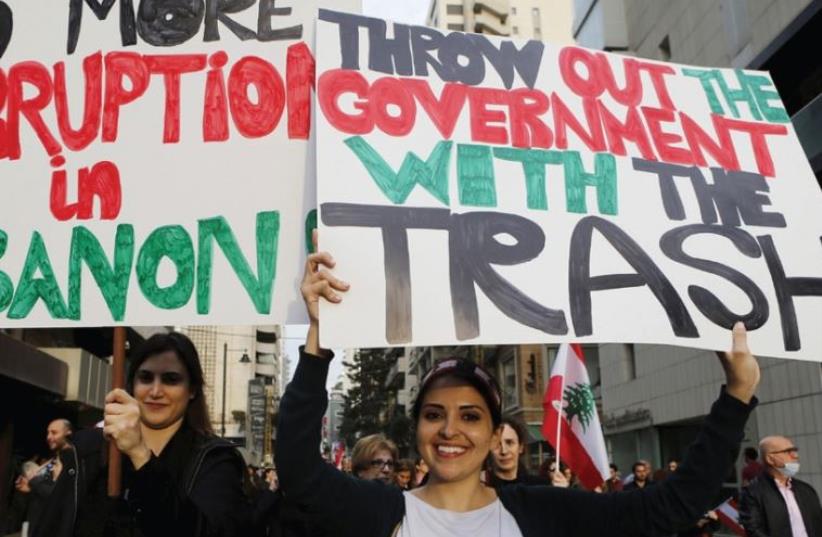 Demonstrators take part in a protest against the government’s failure to resolve a crisis over rubbish disposal in Beirut, March 12
(photo credit: REUTERS)
Advertisement
SAUDI ARABIA’S decision, in late February, to rescind its 3 to 4 billion dollar aid package for Lebanon’s armed forces marked the latest round in the ongoing Saudi-Iranian geopolitical and ideological battles that underpin much of the horrific conflicts roiling the Middle East and reshaping its contours. The action was a clear Saudi message to the fractured Lebanese elites, who preside over a dysfunctional political system – that Hezbollah, Iran’s proxy in Lebanon, needed to be cut down to size, and forthwith.How this was to be accomplished without tearing the country apart, given Hezbollah’s commanding position, militarily and politically, was anybody’s guess. And the specter of a large-scale spillover of ethnic and religious strife from Syria loomed large.

The year 1920 marked Lebanon’s inception as a distinct territorial entity within French-mandated Syria. Achieving independence in 1943, Lebanon constituted an experiment unique to the former Ottoman Arab lands. A “confessional democracy” was established in which power was divvied up among the multitude of ethno-religious groups, led by Maronite-Christian and Sunni-Muslim elites.Central state institutions were left weak, and laissez-faire economics and a strong orientation toward France and the West ensured a degree of liberalism and dynamism unmatched in the region.At the same time, it was agreed that Lebanon would have an “Arab face,” i.e. not adopt any policies that would be inimical to collective Arab, and particularly Syrian, interests. Unfortunately, this precarious republic has never been able to sufficiently insulate itself from conflicts and crises beyond its borders: the Arab-Israeli conflict, inter-Arab rivalries and, over the last 20 years, especially, the penetration of the Islamic Republic of Iran into the eastern Mediterranean. All of these developments interacted with, and exacerbated, internal fissures.At bottom, the fragile power-sharing arrangements that had been worked out at the creation were based on freezing the demographic and socioeconomic profile of 1932, when Christian communities still collectively constituted a majority of the population.Lower birth rates and higher outward migration rates resulted in Christians losing their numerical primacy. Palestinian (Sunni) refugees (100,000 in 1948, 300-400,000 by the mid-1970s) could not be accorded rights, owing to fears of upsetting the demographic balance. And, beginning in the late 1970s, Lebanon’s Shi’ites, now the largest single confessional group in the country, emerged from their downtrodden semi-feudal existence to demand their proper share of the pie.As the Lebanese state fractured during a bloody civil war (1975-89) and overlapping rounds of Arab-Israeli violence, Hezbollah, supported by Iran and Syria, emerged as the central expression of Shi’ite power.In summer 2006, the damage wrought to Lebanon by the Israel-Hezbollah war was blamed by many in Lebanon and the Sunni- Arab world on Iran. A decade later, the Sunni-Shi’ite/Saudi-Iranian divide has only deepened, with deleterious consequences for Lebanon.The latest Saudi actions were sparked by the sacking of the Saudi Embassy in Tehran, in January, following the Saudi execution of a dissident Shi’ite cleric. An ensuing Saudi-sponsored resolution against Iran in the Arab League was not endorsed by Lebanon’s foreign minister, enraging Riyadh, and leading to the aid suspension. On March 2, the Saudi-led Gulf states and a majority of Arab interior ministers branded Hezbollah a “terrorist organization,” and the Lebanese press speculated about a variety of harsh economic and political sanctions the Saudis might impose.Making matters even more charged is the fact that Lebanon’s political system has not been this fractured in decades ‒ it has been without a president since May 2014, and the term of the current parliament, the body that selects the president, is about to expire.Parliament itself has mostly been in recess, owing to a fundamental disagreement over its role in the absence of a president, and over the terms of a draft electoral law. Without a president, cabinet decisions must be unanimous, thus giving each of the 24 members, many of them aligned with Hezbollah, veto power over all decisions.Lebanon currently hosts 1.3 million Syrian refugees, and more than 50 percent of its six million population (only four million of which are citizens) are in need of some kind assistance. The delivery of basic services – electricity, water, garbage collection – is severely deficient; an eight-month long garbage crisis, in which mountains of refuse accumulated, prompted unprecedented mass demonstrations by an enraged public under the “You Stink” banner.Their taking to the streets highlighted the vibrancy and energies that still exist in Lebanon’s civil society. But no one has yet found the way to mesh communal and civic identities in a way that will enable Lebanon to survive and prosper in the face of the whirlwind of centrifugal forces within and beyond its borders. ■

The author is a Principal Research Fellow at the Moshe Dayan Center for Middle Eastern and African Studies, Tel Aviv University
Advertisement
Subscribe for our daily newsletter