What does Judaism have to say about death?

Hillel Halkin’s ‘Reflecting on Death, Mourning and the Afterlife in Jewish Tradition’ is both instructive and thought-provoking. 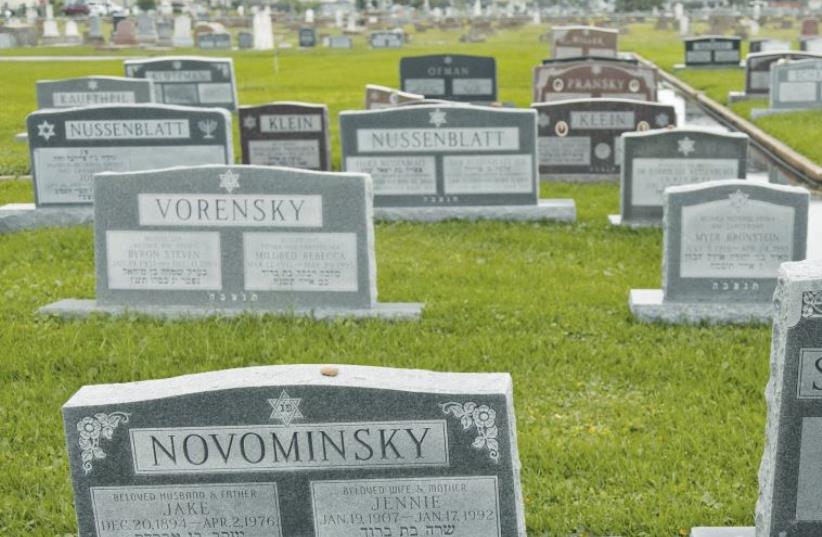 The B’nai Israel cemetery.
(photo credit: PAUL ROSS)
Advertisement
JUDAISM HAS a lot to say about death, and one would be hard-pressed to find a more knowledgeable or astute guide through the vast literature of Jewish thanatology than Hillel Halkin. The author, born in New York to a family of noted scholars and a citizen of Israel since 1970, is the premier English translator of Israeli fiction (S.Y. Agnon, Leah Goldberg, A.B.Yehoshua, Amos Oz, Meir Shalev, and many others). He’s also a Yiddishist who has translated Sholem Aleichem, a medievalist who has published a biography of the Spanish- Jewish poet Yehuda Halevi and translated the work of another such poet, Shmuel Hanagid, and a linguist who knows his way around several other modern and classical languages. Halkin, moreover, has published a half-dozen original works of nonfiction, a novel, and countless articles and essays.

Warm and affable, Hillel Halkin is also one of the flat-out brainiest persons I’ve ever met.So, here’s the Biggest of Mysteries being tackled by one of our best and brightest.Halkin, who is just a few years shy of octogenerianism, says that of late he’s been thinking, naturally enough, a good deal about death. Thus when Princeton’s Library of Jewish Ideas offered a list of topics to Halkin for his next book, the author leaped (OK, maybe not leaped) at the opportunity to explore Jewish thinking about matters post mortem. Basically we’re opposed to death and dying, but there’s more to say.Unsurprisingly, Halkin’s scholarly survey does not disappoint. Surprisingly, or perhaps not, Jewish tradition does. The Big D has been a compelling Jewish topic ever since Adam and Eve made that fatal choice from the fruit bowl, but Jewish tradition, it seems to me, and possibly to Halkin too, doesn’t know any more about death than the man in the street. (The man under the earth is something else again.) Just think about Adam and Eve. It was Mark Twain who posited this scenario: with death never having visited the Garden of Eden, our original parents could have had no concept of what God was warning them against. OK, says the couple, we’ll eat this apple, then we’ll die, then we’ll go check on the sheep and maybe gather some carnations for the vase by the big window in the living room. Then we’ll .... Right.Halkin reports that even among modern- Orthodox Jews these days, “it’s striking how easily they have sloughed off assumptions about the world-to-come held to be basic to Judaism for millennia.” Probably the wisest thing we can say about death is that it always comes too early and never comes too late. Or: it’s sad, but inevitable, so live with it. Or – oh, add whatever embroidered words of wisdom you got at the gift shop and hang on your wall. Words may offer comfort (no small possession) but they won’t add much enlightenment. 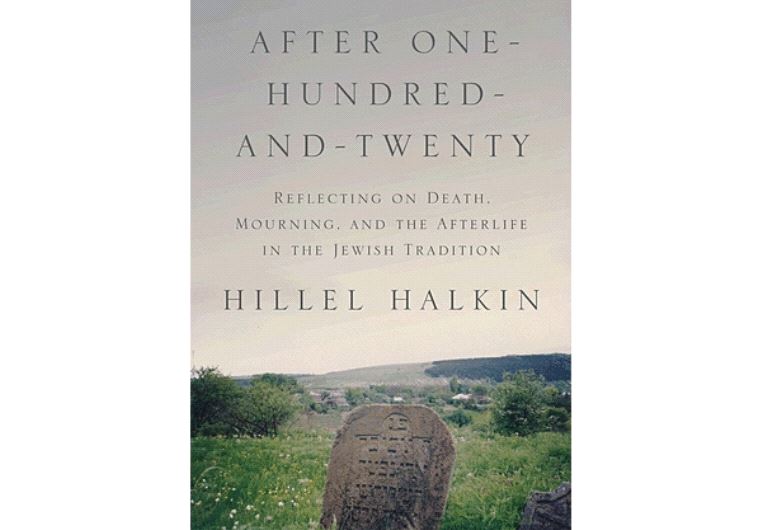 Roughly following the chronology of Jewish thought through the ages, Halkin looks at the vast amount of speculation on the afterlife and finds a complex and often dramatic development of ideas, some scary, some intoxicatingly wonderful, but all of them, as noted, speculative. Jews have entertained a wild variety of concepts involving post-world punishment and reward, both temporary and eternal, sensual and spiritual, in stages and all at once. Likewise, notions of resurrection abound. If buried in Israel or not? In body or just in spirit? If the former, in the body you croaked in or in a younger, more robust form? And back to earth or to some other destination? And, yes, the sages even played with reincarnation. Body or spirit? To a new self or to someone or to something different? As human or insect? The 10th century rabbi and philosopher Saadia Gaon, for example, wrestled with resurrection by considering the following problem: “The risen bodies of the dead, if recomposed from their original earth, water, fire and air, the four elements believed by medieval science to form the basis of all matter, would need to include substances that had also been in other bodies. Thus, for instance, every breath a person takes may include particles of air that have been breathed by someone else before him and released from that person’s decomposed body after death, or for that matter, from any number of bodies. To whom will these particles belong on the day of the resurrection? And how could anyone deprived of them rise as a complete human being if components of his are missing?” Right again. In any case, Halkin guides us through it all, or at least through all the highlights, always with the apt quote and documentation, rarely with endorsement or rejection. The best of it seems to come from the rationalist Maimonides; the most inventive, and simultaneously the zaniest, from the kabbalists. Otherwise what’s to endorse or reject – it’s often fine poetics, but it’s all guesswork, and to my mind, not even especially inspired guesswork. Halkin – and Jewish tradition – are on much firmer and wiser ground on such earthly subjects as mourning and mourning rituals (smashing dishes?), respect for (and horror of) corpses, the Kaddish, ethical wills, war, suicide, remembrance, Israel’s Memorial Day, and such Talmudic questions as whether or not it is permissible to hold a wedding feast during a period of mourning. (It may depend on whether or not meat for the feast has already been purchased.) Interspersed with all of this scholarly inquiry are several personal stories offered by the author. These are always fascinating, and notable for their almost painful candor. Writers of a certain age have little reason to dissemble. The stories reveal how the very young Halkin had a morbid fear of illness and death, how he once fell into a burial cave on his property in Zichron Yaakov, how he visited the otherwise off-limits room where burial society volunteers prepare the departed for their holes in the ground, and how, despite being raised in a religiously observant household, after the shiva week Halkin never again said Kaddish for his parents.These personal anecdotes are among the high points of “After One-Hundred-and- Twenty.” But for this reader the most outstanding part of this wide-ranging and even discursive book is Halkin’s discussion of the 19-poem sequence that the medieval Spanish poet Shmuel Hanagid wrote about mourning his dead older brother. The poems, which Halkin originally translated over many years as part of his magnificent bilingual collection of Hanagid’s verse, published in 1999 as “Grand Things to Write a Poem On,” constitute a scorching portrait of a Jewish soul in all the stages of grief and beyond.Early on, the poet exclaims: “And when they said, / ‘Time heals all wounds,’ / I answered them: / ‘A curse on time and its cure!’”
Crazed with grief, Hanagid next addresses his deceased brother: Are you all right?
Shall I speak louder?
And will you hear me if I raise a voice
That’s cracked with grief?
Why don’t you answer me?
Say how you passed the night in your new home!
Do you begin to feel your skin peel from your bones,
Your jaw unsocketed?
Did life’s last sap run slowly out of you
As my tears trickle from me, one by one? On and on the poems spill forth, recording with soaring poetics and psychological acuity the heart of the grieving Hanagid, unable to reconcile himself to his brother’s death, cursing himself for living and yet already longing for “bathhouses, amusements, dalliances,” grieving, grieving, and finally, after a year, resolving, with something like the wisdom of Solomon:“…No tongue can count or words recount
God’s grace to men!
For I,
Who in my grief declared that of despair my soul would die
Before it reached the end of sorrow’s hemmed-in way,
Now walk abroad in comfort,
My sorrow sloughed away,
As my poor brother’s flesh is in the grave.
And though compassion in my bowels still does stir
Until I groan like many men possessed,
Most times I am like one who in his heart
Unburdened is of troubles laid to rest.
Thus, the Lord sickens and strikes down,
And heals and quickens him whom
He has stricken…”I don’t believe these 19 poems of bereavement stir me solely because like Hanagid I too buried an older brother named Yitzhak.Seek out for yourself Halkin’s “Grand Things to Write a Poem On” for a dual delight from one of our greatest poets and from one of our most gifted translators. Seek out as well “After One-Hundred-and-Twenty.”The meditations on death therein will instruct and provoke. They also may well reinforce the notion that the real mystery is not death, but life.
Advertisement
Subscribe for our daily newsletter