10,000 set out from Auschwitz to commemorate Holocaust victims in March of the Living

Three kilometer march from Auschwitz to Birkenau, the largest and most notorious of death camps, honors the six million Jews murdered by Nazis in the Holocaust. 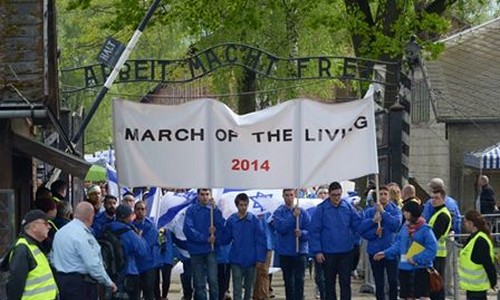 AUSCHWITZ – Hagai Mei-Zah’s mother was only four years old when she was orphaned at Auschwitz. His father survived after jumping out of a train from Budapest to the death camp, near Slovakia, while his grandfather was murdered at the camp.Today Mei-Zah is deputy chief of mission for the Israeli Embassy in Budapest, and on Monday afternoon he joined over 12,000 high school students from some 30 nations as they marched from Auschwitz to Birkenau for Holocaust Remembrance Day.Many of them were draped in Israeli flags and wore bandanas with the names of their home cities stenciled across them.“This is an extremely significant event for me because of my family, and my role as a representative of Israel – especially in light of growing anti-Semitism in the world,” said Mei Zah.He then looked to the sky.“I’m sure my grandfather is up [in heaven] feeling a piece of comfort today just by us waving the flag of Israel when we walk here,” he said.“This is our revenge, and our victory.”Still, he conceded that he was concerned about the future of the Jewish people, particularly in Hungary, where the anti-Semitic nationalist Jobbik party continues to garner significant support.“I worry about what will happen in 10 years when there are no more survivors,” he said. “So now we must document as much as we can, and the government has to continue to educate young people about what happened here.”Hours before the annual march, sponsored by International March of the Living and the Israeli- Jewish Congress, the students extensively toured the notorious death camp, where nearly 1.5 million Jews were systematically dehumanized and slaughtered.Many could not contain their emotions, or tears, as they viewed the numerous gas chambers responsible for the mass murders. Countless nail scratches embedded in the walls inside – left by victims attempting to rise above the deadly Cyklon B gas – were still visible as a haunting reminder.“Oh my God,” said one young woman from Los Angeles, her mouth and eyes wide as she walked through one death chamber with rain steadily pouring outside. “My father’s family died here.”“Monsters!” said another young man wearing a Cincinnati bandana, to no one in particular.Asked to articulate his feelings, 17-year-old Corey Moses of Montreal, who is spending two weeks with his classmates touring Poland, looked ashen as he walked past a crematorium.“Shocking, confusing and emotional,” he said. “I never really related to the Holocaust, but now it just hit me. My stomach dropped. I’m just in shock.”He added, “I’ll see life from a different point of view and treat people with more respect now.”Mason Mintzberg, a high school senior who is also from Montreal, echoed Moses’s sentiments.“It’s really opened my eyes to the world,” he said. “To witness that all this is here and that it really did happen is shocking to see. When I go back I’ll feel very proud to be Jewish because we survived all of this.”Meanwhile, Karin Norieli, a 22-yearold Israeli student who traveled to Poland for the event with IJC, read from her book of Psalms as she walked from site to site.“There are a lot of families that died in the Shoah, and they had no one to pray for their souls, so I said the entire Tehillim [Psalms] to make sure someone prayed for them,” she said. “I pray as I walk, because most of these people didn’t have a proper burial, and their blood is everywhere here.”Benjamin Smalhout, 22, a member of Likud Holland and the great nephew of late MK Yuri Stern (Likud Beytenu), described the visit as a “life-changing experience.”“One of the key elements of combating the irrational hatred against Jewish people is awareness,” said Smalhout. “And a single visit to Auschwitz is a life-changing experience.A single visit should be enough to make people aware.”IJC head of operations Yael Kasutto- Sharon said International March of the Living served as a perfect educational model for Jews and non- Jews alike.“I think every person at the age of 17 or 18 must come and visit Auschwitz to learn about the past,” she said. “If young people from countries where anti-Semitism continues to grow came here, we could finally put an end to it.”Jess Jackoway of Beverly Hills said the visit would leave an indelible mark on him.“It’s been amazing seeing so many people united for a single cause,” he said. “I know that down the road [this] will continue to have a profound impact on all our lives.”According to Arsen Ostrovsky, IJC’s director of research, that impact is an invaluable resource for the future.“There are two key things here,” he said. “One: It’s important to honor the memories of those who perished in the Shoah. At the same time, I look around at these young people and I see a reaffirmation of Jewish life.There’s a sense of pride in seeing so many Israeli flags, and the pride that these kids have in Israel.”When the massive procession finally reached Birkenau, many of the students planted small placards with messages of hope in the center of the infamous railroad tracks leading to the camp, to memorialize the victims.“And another sun will rise,” wrote one girl, weeping over the sign while wearing an Israeli flag over her shoulders.