Europe Unexpected: Bubbe's village with a side of Vodka

An adventure through Ukrainian backcountry to visit my grandmother's old village, which she fled after WWI when the Jewish community got caught in the midst of political chaos.

By MOLLY GELLERT
SEPTEMBER 8, 2013 12:41
Ukraine 390
(photo credit: Molly Gellert)
Advertisement
What’s the difference between a tiny Ukrainian village one hundred years ago and that same village today? Not much, except that it’s a few Jews short.   I hadn’t planned on going to Kiev, let alone taking a road trip through Ukrainian backcountry to visit my grandmother’s village, but my dad and uncle were set on going and I couldn’t resist an adventure.We met in Kiev arriving from three different cities: I travelled from Budapest, Hungary, my Uncle George from Gdansk, Poland and my dad from New York, USA. From the airport we headed straight for Stara Syniava, my Bubbe’s (grandmother's) village.  Through his vast international network, Uncle George had arranged for a driver, who spoke Ukrainian and Russian, to take us from Kiev to Stara Syniava and back. Google Maps said the trip would be an easy four hours each way. Unfortunately we packed snacks accordingly, but the adventure would take almost twice as long.  We settled into our journey. My dad and I sat in the back and my Uncle George in the front. Upon leaving the airport parking lot my uncle took off his shoes, stretched his socked feet comfortably on the dashboard and began his good intentioned rapid fire:“So Molly, how’s your Hungarian? How’s your Russian? How’s your love life?”Following my semi-satisfactory responses, the conversation transitioned to catching up with my dad on family and business, two subjects that for them usually overlapped. I tried to follow their stream of dialogue:“…Exceeding our expectations…sales in Argentina…call Geza… a concussion yeah that’s why he’s doing homeschooling…more retail, retail is good…Tom’s turning 40, he’s not celebrating but maybe dinner at an Ethiopian place...”“Oh yeah, and Tom’s running for the Board of Directors,” my Uncle George said of his younger son. “Really? I didn’t get a ballot,” my dad said.Uncle George shuffled with his three cell phones and typed into a Blackberry while reading out loud, “Subject:...Un-cle Joe…did not..get a bal-lot…”A second later his Blackberry chimed: Tom had responded immediately. I couldn’t help but laugh out loud, a huge laugh that made the driver glare at me in the rear view mirror. There we were in the middle of Ukraine, getting a rapid response from someone on the other side of the world.  “I get things done here Molly. You can’t wait for tomorrow,” my uncle responded, re-crossing his ankles on the dash board and resting his right pinky finger close to his mouth, just like my dad does.The business chatter continued as I redirected my attention out the car window. We passed small, brightly painted houses, sleepy men talking shop on benches and old women selling jars of who knows what. We passed boys racing on bicycles and middle aged women with handkerchiefs on their heads and buckets in their hands wading through geese. I tried to pronounce the Cyrillic road signs, which were few and far between, and marveled at the handful of Soviet tanks that appeared every once in a while on the side of the road, abandoned but seemingly admired at the same time.  “Maybe we’ll find a synagogue,” my dad said. I looked over at him and saw that his eyes seemed teary as he too took in the view in awe.“You go to synagogue Molly?” my Uncle George asked me.“Not as much as I’d like to.”“It’s a great way to meet guys you know.”“So how do you get to Ellis Island from here?” I asked the brothers, intentionally changing the subject. Ellis Island, an inspection station in the Upper New York Bay in Jersey City, New Jersey, was the point of entry for millions of immigrants to America, from 1892 through 1954. It specifically served as the gateway to New York for my great grandmother, grandmother and two great aunts who fled Ukraine. One only needs to do a quick search on Wikipedia to understand why my family wanted to leave Ukraine. After World War I, the country fell into political chaos as it was fought over by German and Austrian forces, the Red Army of Bolshevik Russia, the White Army of Imperialist Russia, the Polish Army and Ukrainian nationalists. In the final tug of war between nationalist resistance and Russification, the Jewish community in Ukraine got caught in the perils of nationalism and the ferocity of terror on all sides. During this time there were over 1,000 pogroms, or attacks specifically targeted at Jews, throughout the country, killing somewhere between 30-70,000 people and completely destroying Jewish neighborhoods; approximately half a million Jews were left homeless by 1921.    “You take a boat,” my dad said, responding to my question.“Yeah but how do you get to a boat from here?” I looked out the window as we whizzed past a group of goats munching on tall grass and could have sworn one of them stuck its tongue out at me.   “They crossed the border hiding in a hay filled wagon. Soldiers poked at the straw with a pitchfork to look for runaways,” my uncle said, molding his fist to clench an imaginary pitchfork as he demonstrated the quick jabs at the wagon. “But they were never found.”I wanted to press on. How do you get from that border, to another border and eventually to the sea? But in that moment our attention shifted to a large herd of cows, leisurely crossing the street.  From the cows and the countryside and our driver asking a few too many people for directions, we made our way into what felt like a rundown city center. Rundown is probably not the right word: there were beautiful egg shell blue churches topped with gold onion domes, paved roads and newly posted billboards. Maybe sleepy is a better word.“Is that [Vladimir] Lenin?” I squealed. Out the window was a large statue of the proletariat leader in a triumphant pose. This time the driver looked at me in the rear view window with a coy smile and nodded. 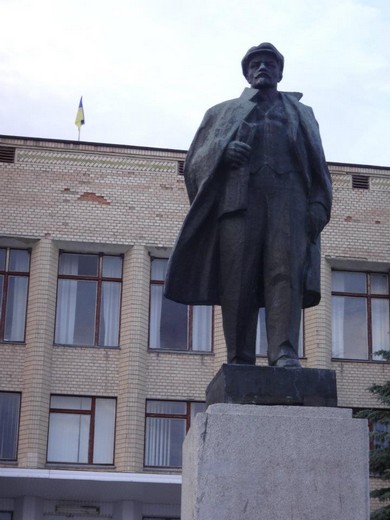 “Molly has a thing for Lenin” my dad said and added, “He killed a lot of Jews you know.”“Yeah, yeah can we still stop for a picture?”The statue of Lenin stood in front of a columned building, most likely a town hall of some sorts.  On the stoop of the building sat three old men in a row, all wearing the same slouchy news boy cap and over-sized coat as Lenin in the statue. Not too far from them a babushka (headscarf) clad woman was hunched over a large planter, whacking weeds with a machete.   After taking a few pictures I turned around and saw my uncle standing with a teenager on a bike. Uncle George had called his Russian speaking secretary in America, Maria, to ask this teenager if there was a Jewish synagogue around. The teenager chatted with Maria on one of Uncle George’s cell phones informing her of a Jewish cemetery not too far. Uncle George thanked the teenager and passed the phone over to the driver so that Maria could tell the driver what the teen had explained. But we weren’t quite ready to stuff our legs back into the car.“That looks like a bar! Who wants to go in for a drink?” my uncle asked us.The next thing I knew I was following my dad and Uncle George’s long legged stride into the bar. The driver, despite our offer for him to join us, firmly declined.
The bar was dimly lit with a few neon lights and a disco ball overhead. We were the only ones there, with the exception of the bartenders who seemed entertained by our mere presence.I ordered our drinks with a combination of sign language and my take on the Russian accents heard in spy movies.“Three” I said, holding the appropriate fingers on one hand in the air, “VUD-kah” creating a two inch space between my index finger and thumb to indicate we wanted our vodka in shot glasses, the Ukrainian way. After a toast to our adventure we were back in the car, on our way to find the Jewish cemetery.  Along bright red poppy fields and past the great Bug River (pronounced boog) we drove, asking directions from every schemata (rag) wearing yenta (chatty woman) we saw. Finally we curved into a muddied path and climbed further up a hill. We were surrounded by large farms, most likely worked on by several families as part of Soviet collectivization. Then our driver stopped. The place we arrived in was not a large cemetery but rather a mere fenced-in tomb stone. It was black and shiny and in perfect condition. Around the grave lay a few plastic floral wreaths. An image of a menorah was etched onto the tomb as well as text in Ukrainian that read: In this place on August 19, 1941, 460 Ukrainian Jews, who were peaceful inhabitants of the village of Stara Syniava, were executed. 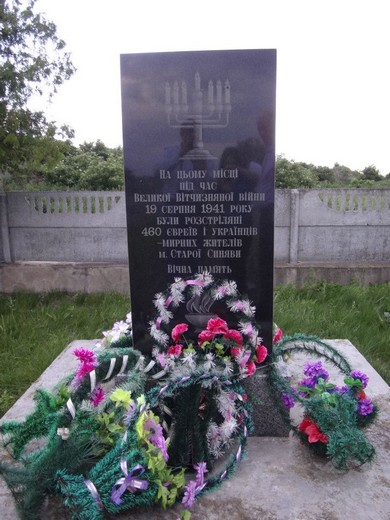 We followed the Jewish tradition of leaving a small stone on the tomb, before exiting through the fence that surrounded the memorial. At this point the sun had almost fully set and the clouds and the sky mixed together in purples and deep blues. What a beautiful place to have left. Though the farms and way of life haven’t changed much there was a sense that something was missing, and that maybe, something had returned.
Advertisement
Subscribe for our daily newsletter