Throughout the ages and on separate continents, Torah scrolls have survived.

By ARI MARRACHE
SEPTEMBER 25, 2013 14:27
Torah scrolls around the world 370
(photo credit: Elie Posner/ Israel Museum)
Advertisement
Each country has its own traditions regarding the encasing and decoration of its Torah scrolls. In Morocco, for example, it was customary to cover the scroll with a mantle, unlike the tradition in most North African communities, where it is enclosed in a rigid case. Illustrations in Hebrew manuscripts suggest that this custom (seen in the Italian Torah scroll) originated in Spain. The mantle combines a stiff body and a hard, round top, strengthened with cardboard.Gilt metal-thread embroidery embellished a cut-out leather pattern to create dense geometric patterns and stylized floral designs.As a rule, the textiles used in the decoration of Torah scrolls were embroidered by Jewish men. At the Jack, Joseph and Morton Mandel Wing for Jewish Art and Life of the Israel Museum, a display is currently on view, the main section of this display is dedicated to Torah scroll ornaments representing Jewish communities around the world.Conceived to provide a view of Diaspora life dating back to the Middle Ages, the wing includes a new “Synagogue Route,” containing four original, reconstructed synagogue interiors from Vittorio Veneto, Italy; Horb am Main, Germany; Cochin, India; and Paramaribo, Suriname. 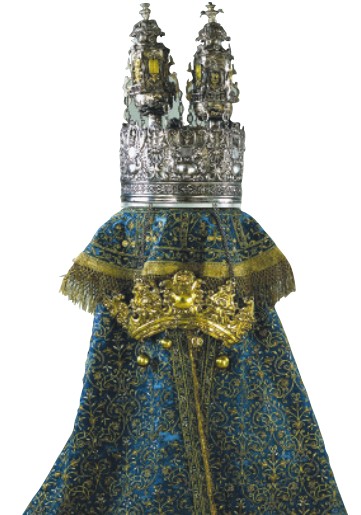 t it was dedicated in memory of members of the yedid and Hanan families. TORAH SCROLL case: Persia, ca. 1913; wood, cotton velvet; brass sheet, cut, engraved, and painted Inscribed in Hebrew with biblical verses, the name of the donor, Moses Abraham, and the year of donation in memory of his wife, Sarah. Purchase, received through the efforts of Bracha yaniv, Survey of Synagogues, Center for Jewish Art, The Hebrew University of Jerusalem, and Abba Ben yosef Na’amat.