The New York designer with her heart in Israel

Like many Israeli artists, New York based Nili Lotan finds inspiration in conflict, but has found a unique medium for social change: the sartorial.

By ELIORA KATZ
OCTOBER 7, 2013 17:02
Nili Lotan
(photo credit: Courtesy Nili Lotan)
Advertisement
In recent years, Israel’s walls have been causing quite the brouhaha. Two have transcended brick, mortar and security guards, becoming the country’s leading conflicts incarnate. The Western wall and the women at it have been stealing the headlines with questions of traditional religion in the modern state. Meanwhile, a younger partition serving as the apotheosis of the occupation – the Israeli West Bank barrier— was just dubbed “100 times more horrifying” than Berlin Wall by Pink Floyd’s Roger Waters. "Terrorist”, “apartheid”, "humanitarian crisis”, "security", "oppression”, “green line” and “ethnic cleansing" are words commonly associated with the former wall, but thanks to the work of one Israeli designer, we just might have another rather surprising one: “fashion.”Like many Israeli artists, New York based Nili Lotan finds inspiration in conflict. In spring 2006, prompted by the Second Lebanon War, Lotan design 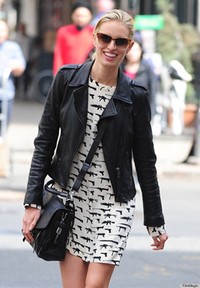 ed a gun print and slapped it on her silk charmeuse tee dresses and scarves as an “an anti-war protest.” That was just the beginning of what she calls “where fashion meets photo journalism.” A week following the 2013 Boston shootings, Supermodel Karolina Kurkova stepped out onto Tribeca's cobblestone streets in Nili’s gun-print dress inciting roaring reproaches from the press.Lotan admitted that despite the platitude, there is in fact bad PR. “The dress made in 2006 was a protest, against war after the Lebanon conflict, and had nothing to do with gun laws in the US. I don’t know if I would do it again.”Maybe a gas mask? “That’s not sexy,” answers Lotan with a playful chuckle.For fall 2009, Nili collaborated with Israeli photographer Ziv Koren, designing dresses with prints depicting the fall of the Berlin Wall in 1989 alongside images of the 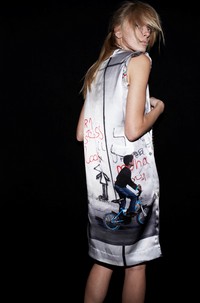