A 'Jpost' column wrapping up the hottest Jewish culture news worldwide: Natalie Portman has a baby boy; Yiddish vocab for the 21st century.

By LAHAV HARKOV
weekly schmooze 311
(photo credit: Courtesy)
Advertisement
Happy Bloomsday! If you're not familiar with the significance of June 16, it's the day in which the entire plot of the book Ulysses takes place. Someone known only as "Stephen from Baltimore" has decided to tweet James Joyce's entire Dublin odyssey described in the novel. Fans of Stephen Dedalus and Leopold and Molly Bloom can follow the tweets at @11ysses.If we're already on the topic of Twitter, some California towns are attempting to ban circumcision, and actor Russell Crowe took to the micro-blogging site to support the move. "Circumcision is barbaric and stupid," Crowe tweeted, adding: "I love my Jewish friends, I love the apples and honey and the funny little hats, but stop cutting your babies." Director Eli Roth (also known for portraying The Bear Jew in Inglorious Basterds), who worked with Crowe on the upcoming The Man With the Iron Fists tweeted back to the actor: "You didn't seem to be complaining when I was recutting you this afternoon."A big mazel tov goes out to Natalie Portman, who gave birth to a baby boy this week. No name has been released - we'll probably have to wait until after the bris next week. Sorry, Russell Crowe. 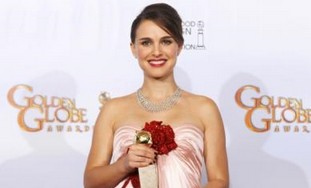 Natalie Portman (Reuters)Darren Aronofsky, who directed Portman in Black Swan, pitched a film about Noah's Ark, with an "edgy" take on the story, Christian Bale in the lead role, and a $130 million budget. Aronofsky was previously attached to Exodus, which tells the story of – guess what? – the Exodus from Egypt.The Schmooze was _____ [adjective] to hear that Mad Libs creator Leonard B. Stern died last week at age 88. Stern came up with the game while working as a screenwriter for "The Honeymooners" in 1953. The wordplay _____ [noun] sold _____ [adverb], becoming a hilarious, classic game.It's been said that Yiddish is a dying language. Writer Tim Harrod decided to revive it, publishing a list of "Yiddish Words for the 21st Century" on literary site McSweeneys. Some examples:
* Shlilmazlsikornfargart: Incredulity that your children have no idea who Charlie Brown is.
* Vonshtuppkomischzorgen: Wondering whether in the Obama era, Blazing Saddles is a) no longer funny, b) still funny, c) funnier.
And now, for some people that may still speak Yiddish, watch The Tailor, a silent film about a mixup involving some dark suits, which was presented at this year's San Francisco Jewish Film Festival. The Weekly Schmooze collects the hottest Jewish culture news from around the world. Ranging from celebrities to philanthropy to quirky communities, we're here to schmooze about Jews.If you have any news to share with The Weekly Schmooze, write to: [email protected]
Advertisement
Subscribe for our daily newsletter