Action star Chuck Norris has experienced a bit of a revival in recent years, due to the "Chuck Norris Facts" internet meme. In honor of the rumor that Walker, Texas Ranger himself may be coming to Jerusalem next week to join US conservative pundit Glenn Beck's "Restoring Courage" event, the Schmooze has some facts 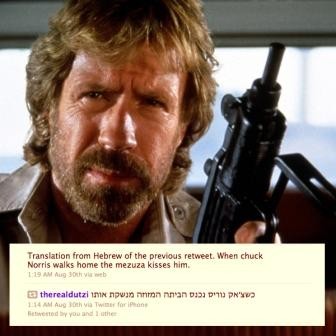 about Chuck Norris and Israel: Norris's seminal film The Delta Force (fine, "seminal" may be an exaggeration) was directed by Israeli Menachem Golan and filmed entirely in Israel. In 1994's Hellbound, Norris played a detective sent to Israel to investigate a rabbi's murder. Both films, along with many other Chuck Norris action flicks, were backed by Israeli production company Globus-Golan. And for some of the more fun facts - one follower of the Schmooze on Twitter said: "Chuck Norris doesn't come to Israel. He moves Mexico temporarily, and puts Israel there."And while we’re on the topic of icons and Israel, this John Lennon clip is worth listening to. Tablet Magazine dug up a YouTube video of the Beatle giving an interview to Israel Radio during his 1969 "bed-in," and singing "Hava Nagila.""Hava Nagila" seems to be all the rage these days, with Jewish-American elite gymnast Alexandra Raisman doing a floor exercise to the hassidic tune. JTA has an interesting analysis of why "Hava Nagila" is a great song for gymnastics, and you can see Raisman's routine here:From gymnastics to dancing – Dirty Dancing, that is. The classic 80s love story is, of course, about Baby, a JAP in a Jewish bungalow colony, who falls for Johnny, a member of the staff, and learns how to dance. Now t 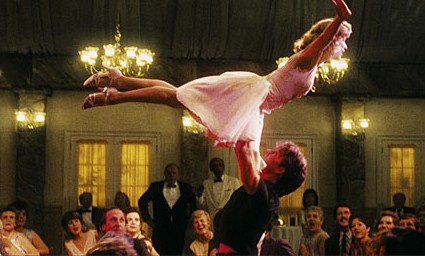 hat a Dirty Dancing reboot is the works, the question must be asked – will the new version be Jewish? If rumored contender Lea Michele plays Baby, originally portrayed by Jennifer Grey, it may work. But reports also say that teen stars Selena Gomez and Miley Cyrus and vying for the role – and they're both 100% shiksa.Another clearly-Jewish Hollywood creation has hit televisions across America: Russian Dolls. The reality-TV show, meant to be a Russian version of the Italian-dominated Jersey Shore, portrays families in Brighton Beach, Brooklyn. While the show never overtly mentions Judaism, Star of David necklaces can be seen nestled in the reality stars' pushed-up cleavage. Diana Kosov, who breaks up with her Hispanic boyfriend in the first episode, said in an interview "I'm looking for a Russian Jewish guy," and other Russian Dolls, Michael and Marina Levitis send their children to yeshiva day school and have a mezuza on their front door.
The Weekly Schmooze collects the hottest Jewish culture news from around the world. Ranging from celebrities to philanthropy to quirky communities, we're here to schmooze about Jews. If you have any news to share with The Weekly Schmooze, write to:[email protected]
Advertisement
Subscribe for our daily newsletter