A 'Jpost' column wrapping up the hottest Jewish culture news worldwide: Non-Jewish stooges; how many licks in a Kosher Tootsie Roll Pop?

By LAHAV HARKOV
weekly schmooze 311
(photo credit: Courtesy)
Advertisement
Before we begin this week's performance, we'd like to start with some refreshments:  Tootsie Roll Pops, Blow Pops and Junior Mints. Yes, these beloved American candies, which have eluded observant Jews for decades, are going Kosher! The OU made an announcement earlier this week, and the Kosher sweets should be hitting the shelves in the next few months. Maybe Tootsie Roll Industries should consider reviving their classic commercials with some Kosher animals: This week's Oscars got mixed reviews from viewers, with some chuckling and others groaning at hosts Anne Hathaway and James Franco's rapport. There was one part of the Academy Awards, though, that seemed to be universally loved: Kirk Douglas presenting Best Supporting Actress. The legendary Jewish actor flirted with Hathaway, asking her "Where were you when I was making pictures?" The 94-year-old Douglas taunted the nominees, delaying as long as possible the announcement that Melissa Leo won the award.Shortly after winning the Academy Award for Best Actress for her performance Black Swan, Natalie Portman took a stand against anti-Semitism. The Jerusalem-born actress, who is also the face of Dior perfumes, said she is "deeply shocked and disgusted" by a video showing Dior designer John Galliano saying "I love Hitler," which appeared online after he was detained for making anti-Semitic remarks in a Paris café. "In light of this video, and as an individual who is proud to be Jewish, I will not be associated with Mr. Galliano in anyway," Portman said. Galliano has since been fired. Rather than give an anti-Semite more attention, the Schmooze is bringing you Portman's lovely commercial for the Miss Dior Cherie scent, directed by Sofia Coppola and featuring the musical stylings of French-Jewish singer Serge Gainsbourg and Jane Birkin: All you sports fans out there had better start brushing up on your Hebrew, because Omri Casspi is ready to dominate the courts! Hot on the heels of an LA Times profile calling the only Israeli in the NBA a "cultural hero," Casspi registered an alley-oop that made the NBA's weekly top ten moments, and led the announcer to yell: "Sheket bevakasha!" Watch the video, and get ready to shout back "HEY!"The Three Stooges are some of the most famous Jewish comedians in history. So why are Pete and Bobby Farrelly, the directors of an upcoming Stooges movie, casting so many 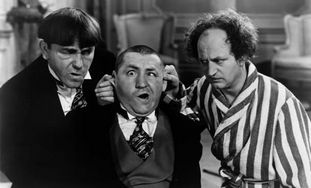 non-Jews? For a while, Sean Penn, Jim Carrey and Benicio del Toro were supposed to play Larry, Curly and Moe, respectively, until all three dropped out. The next rumored trio was Justin Timberlake, Johnny Knoxville and one Yid – Andy Samberg. Other names that have been reported include Woody Harrelson and Larry David. Either way, the Farrelly brothers had better hurry up; the film is set to start shooting in April. We have yet another piece of Jewish humor, with the new hit song "Zenga Zenga." The song, an auto-tuned version of Muammar Gaddafi's speech on a Tripoli balcony, has struck a chord with Libyan rebels. Israeli techno musician Noy Alooshe combined the speech with the hip-hop song "Hey Baby" and added some dancing women in bikinis. The video has since gone viral on YouTube, with over 1,000,000 views in less than a week.Finally, we offer our condolences to Noam Gottesman, one of the richest Israelis in the world, whose father, businessman and Israel Museum President Dov Gottesman passed away this week. Why does that warrant a Schmooze mention? Gottesman is dating Kill Bill and Charlie's Angels star Lucy Liu, and the two flew into Israel on Tuesday for the funeral and shiva.The Weekly Schmooze collects the hottest Jewish culture news from around the world. Ranging from celebrities to philanthropy to quirky communities, we're here to schmooze about Jews.  If you have any news to share with The Weekly Schmooze, write to:[email protected]