By LAHAV HARKOV
weekly schmooze 311
(photo credit: Courtesy)
Advertisement
This week's Schmooze is dedicated to parents. Good-looking parents, that is. Jewish mommy-blog Kveller ranked the top 20 hottest Jewish dads, coming up with a list that ranges from musicians – like Lenny Kravitz – to actors – like Sacha Baron Cohen – to businessmen\philanthropists – like Russian oligarch Roman Abramovich. Kveller came out with a similar ranking for Jewish mothers last year, with Bette Midler coming out on top, and has a "2012 Hot Jewish Moms Calendar," featuring the likes of Kate Hudson and Lisa Bonet. You can enter a contest to win the calendar by 5 P.M. New York time today (Thursday).Barbara Streisand did not make the Kveller cut, but she's about to pay an infamously bad mother on the silver screen. Babs and Joel Silver are producing a new version of Gypsy, in which she'll star as Mama Rose and Downtown Abbey director Julian Fellowes will take the helm. Streisand had announced her plan last year, but the production was in limbo for a long time. Now that it's back, Glee star and Streisand mega-fan Lea Michele is probably waiting by the phone, hoping to hear Babs say: "Sing out Louise!" 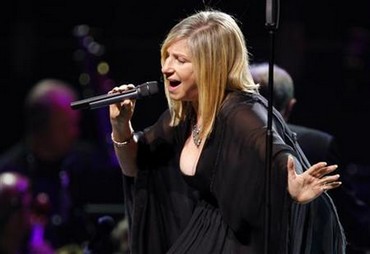 Barbara Streisand (Reuters)
Hollywood's hottest parents may not be Jewish, but they're probably coming to Tel Aviv this summer! Brad Pitt is the top choice to star in the CIA thriller The Gray Man, which is filming in Israel this summer. Brangelina try not to work at the same time – when one is filming, the other travels to the set's location and watches their six kids – which means Angelina Jolie may be sightseeing in the White City, along with Maddox, Zahara, Shiloh, Pax, Vivienne and Knox. According to Israeli entertainment program Good Evening with Guy Pines, numerous hotels in Tel Aviv were asked if they can set aside 50 rooms for the A-list family in August. Check out the news in Hebrew:Finally, we have Sean Penn in an unusual film about a Jewish father and son. Penn stars in This Must Be the Place as a Robert Smith-esque rock star who finds out that his father is dying, and sets out to find the Nazi war criminal who tortured his father in Auschwitz. The movie is coming out next week in the US, with no release date set yet for Israel.The Weekly Schmooze collects the hottest Jewish culture news from around the world. Ranging from celebrities to philanthropy to quirky communities, we're here to schmooze about Jews. If you have any news to share with The Weekly Schmooze, write to:[email protected]