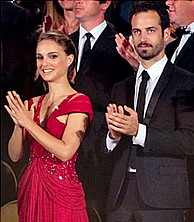 opinion, "Cosby Show" and High Fidelity star Lisa Bonet should be number one, not 17, but the Divine Miss M is a pretty good choice.Speaking of stylish Jewish mothers, Natalie Portman is pregnant! The Israel-born actress, who is garnering serious Oscar buzz for her starring role in Black Swan, is engaged to the baby's father, choreographer and ballet dancer Benjamin Millepied, who is not Jewish.In other parenting news, James Van Der Beek, a.k.a Dawson of "Dawson's Creek," and his wife Kimberly Brook, decided to forgo the celebrity route of naming their child something like Apple (Paltrow- 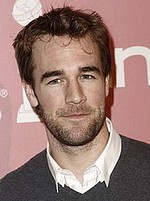 Martin) or Moon Unit (Zappa), and instead went with a more common name: Olivia. The reason behind the name, however, is unusual. Van Der Beek explained to People Magazine that "there's an olive tree in Israel" that's special to him and his wife. "We spent time under it when we first met in Israel, then we went back to this tree when I was pregnant," Brook said. Van Der Beek started studying Kabbalah several years ago, and the couple got married at the Tel Aviv Kabbalah Center in 2010. Everyone loves a supportive Grandma, right? Well, actor James Franco's grandmother is the kind who not only keeps his picture in her wallet, but is more proactive about praising her grandson. In a video for humor site Funny or Die, Franco's grandmother visits her family in California for Christmas, and wears a Santa hat – "That's weird, because you're Jewish," the actor says – and calls people who are too scared to see her grandson's gory film 127 Hours something that can't be printed on a family-friendly website. Here's the clip:
Christmas Greetings From the Franco's from James Franco
Last but not least is a piece of news that definitely is not family-friendly, but may contribute to family planning. Matthew Gerson, CEO of St. Richard's condoms, explained in an interview with New York gossip site Gothamist that his company is one of four in the US that manufacture kosher condoms. Apparently, most condoms in the US contain a dairy by-product called casein. As a vegan-friendly company, St. Richard's makes their condoms dairy-free, and therefore, kosher. There's something to think about on your next tefillin date.What were the Top Ten Jewish gossip stories of 2010? Check out our list!The Weekly Schmooze collects the hottest Jewish culture news from around the world. Ranging from celebrities to philanthropy to quirky communities, we're here to schmooze about Jews.If you have any news to share with The Weekly Schmooze, write to [email protected]