The Weekly Schmooze: The fashion police are in town

By LAHAV HARKOV
weekly schmooze 311
(photo credit: Courtesy)
Advertisement
Purim is over, and the costumes are off, but sometimes it's hard to tell what is a costume and what is real clothing. Trinny Woodall and Susannah Constantine, former hosts of BBC's "What Not to Wear" came to Israel to make over Tel Aviv's most unfortunately-dressed denizens for a Channel 10 program called "Trinny and Susannah Do Israel." In last week's series premiere, the duo lamented the abundance of what they called "lesbian shoes" as opposed to stilettos, shopped for hats in Shuk HaCarmel, and tried to teach Israeli teenagers to show a little less skin. They were thwarted in their never-ending quest to get women to wear the right bra size when faced with one who had nursed 22 children, and had no idea what to make of Breslev hassidim dancing in the streets. The moral of this story? Take a good look in the mirror next time you leave the house, because the fashion police are in town.Still on TV, literary couple Michael Chabon and Ayelet Waldman is co-writing a show for HBO about magicians fighting Nazis in World War II. "Hobgoblin" will mark the first time that the two have collaborated professionally. The show is still in very early stages of production.On the big screen, director Barry Blaustein brings to life a modern Jewish family in crisis, in the new film Peep World. Comedienne Sarah Silverman, "The Office"'s Rainn Wilson, and Michael C. Hall of "Dexter" play the siblings of writer Nathan Meyerowitz (Ben Schwartz) dealing with aftermath of a very revealing memoir about their family, while gathered at their a dinner for their father's (Ron Rifkin) 70th birthday. With a cast like that – plus Taraji P. Henson and Judy Greer in supporting roles – expectations are high, and from the trailer it looks like Peep World won't disappoint.If we're already on the topic of revealing writers, the Schmooze would be remiss if she didn't mention a feature in last week's Village Voice. According to Victoria Bekiempis, there is a Geisha-esque sub-culture in Manhattan, where women escort Asian businessmen to dinner and in bars in a purely platonic way. Bekiempis writes that her stereotypically Ashkenazi features – curly hair, pale skin - made her exotic in a sea of Japanese and Korean women. Customers would tell her they "could just tell" that she's Jewish and pull on her curls and watch them bounce back into shape.This has been a big week for Jewish rock stars in Israel. First, it was confirmed that Bob Dylan will perform in the Ramat Gan Stadium on June 20. Israeli producer Marcelle Avraham will organize the concert, part of Dylan's "Never Ending Tour." Dylan previously performed in Israel in 1987 and 1993. 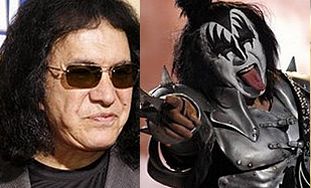 Next, we have KISS lead singer Gene Simmons, born near Haifa as Haim Witz. Simmons visited Jerusalem on Tuesday for an episode of his reality show "Gene Simmons Family Jewels." In an interview with The Jerusalem Post, he said that artists who boycott Israel are "idiots," and exclaimed that "there ain't no place like [Israel] on planet Earth!" He added that he has not performed with KISS in Israel because "it's enormously expensive" to bring a show to another country. "We would need a corporate partner to step up," he explained. Do you hear that, Israeli corporations?Finally, we have Bob Geldof. Geldof famously does not like Mondays, in fact, as lead singer of the Boomtown Rats, he sang "I wanna shoot the whole day down," but maybe this Monday was an improvement. Ben Gurion University of the Negev announced this week that Geldof will receive an honorary doctorate at its Annual Board of Governors Meetings in May. The former rocker and star of The Wall, who has Jewish ancestry but does not consider himself Jewish, is now a renowned activist against poverty, who organized the Live Aid concert in 1985 and the Live 8 concerts for Africa in London, Paris, Philadelphia, Rome and Berlin in 2005. On his visit to Israel, Geldof also plans to participate in a conference sponsored by IsraAID – The Israel Forum for International Humanitarian Aid on "Israel in Africa – Past, Present and Future." Just for fun, here's Geldof and the Boomtown Rats singing "I Don't Like Mondays:"The Schmooze does not condone bank robbery, but if you're going to plan a heist, imitating a Jewish rapper group's video is the way to go. A Portland, Orgeon man robbing banks in a suit, black wig, fake mustache and dark sunglasses is being called the "Beastie Boys Bandit" by local police. The man has been caught on surveillance camera tapes at multiple banks, demanding money by saying he has a gun or explosives. If you've seen him, you can notify the Portland police, and if you want to know what he looks like, watch "Sabotage:"The Weekly Schmooze collects the hottest Jewish culture news from around the world. Ranging from celebrities to philanthropy to quirky communities, we're here to schmooze about Jews.If you have any news to share with The Weekly Schmooze, write to: [email protected]