The Weekly Schmooze: The Legend of Sam Fuld 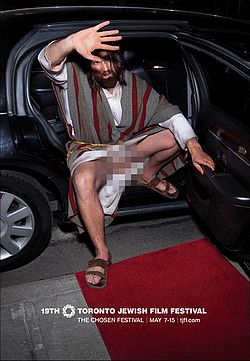 Britney Spears. Linday Lohan. Paris Hilton. Moses? Yes, the man who was able to free us from Egypt had a bit of a wardrobe malfunction while getting out of his limousine, according to this advertisement for the Toronto Jewish Film Festival. The ad was banned from public transportation, on grounds that it is offensive, although Ad Weeks seems to be unable to imagine why. A YouTube video promoting the festival, which runs from May 7-15, shows how the skills Moses picked up during Exodus help him pick up women:Music fans will be excited to hear that quite a few musical groups will be visiting Israel this summer as a party of the Pic.Nic Music Festival, including Jane's Addiction, moby, and Duran Duran. Check out this video of festival performers greeting their fans, if you want to see Perry Farrell – guess what, he's Jewish too! – sing the ma nishtana:In other news of late 80s stars the Schmooze didn't know are Jewish, Fred Savage, a.k.a. Kevin Arnold from "The Wonder Years," is featured in a video for comedy site Funny or Die. Interviewer Adam Pally points out that Mayim Bialik of "Blossom" is also Jewish, and asks a question no one has cared about in 20 years: Did they hook up?
Riding Shotgun with Adam Pally from Fred Savage
After all the hype, the Beastie Boys' short film Fight For Your Right Revisited has finally been released! The half-hour movie, starring Seth Rogen, Elijah Wood and Danny McBride and featuring cameos from too many celebrities to mention, can be viewed at BlackBook Magazine's website.Hardly a day goes by without The New York Times reporting something Jewish. This week, the Grey Lady put together a video about Chabad's "Mitzvah Tanks," motor homes converted into travelling synagogues in which secular Jews are asked to do mitzvahs. Chabad sent out 61 "tanks," to commemorate 61 years since the Lubavitcher Rebbe became the hassidic sect's leader.Have you heard the Legend of Sam Fuld? Fuld replaced Manny Ramirez, who retired less than a month ago after being caught using performance-enhancing drugs, and since then has shone on the baseball diamond, batting .348 with seven stolen bases on one of this season's best teams, the Tampa Bay Rays. Fuld, a Jewish, 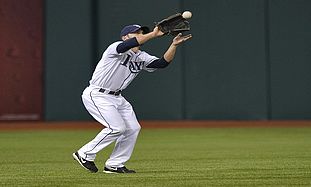 Stanford-educated outfielder, has his own version of "Chuck Norris Facts" in the form of a popular Twitter hashtag: #LegendofSamFuld. Baseball fans are tweeting things like "Sam Fuld once struck out just to see how it felt. He didn't like it. AT ALL #LegendofSamFuld" and "The All Star ballot received a huge honor wend #LegendofSamFuld decided to grace it with his presence." You can vote for Fuld on this year's All Star ballot, and come up with your own legends for Sam Fuld in the talkbacks.The Weekly Schmooze collects the hottest Jewish culture news from around the world. Ranging from celebrities to philanthropy to quirky communities, we're here to schmooze about Jews.If you have any news to share with The Weekly Schmooze, write to:[email protected]