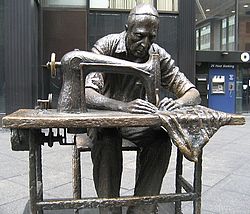 sculpted in 1984 by Israeli artist Judith Weller, depicting a tailor bent over a sewing machine. The tailor is wearing a kippa, and many say that this is symbolic of Jewish contributions in New York's Garment District. Well, it seems that the tradition of tailoring is still alive, because The Schmooze has three stories about Jews making clothes this week.First, we have Elizabeth Emanuel, who designed a dress for the biggest wedding of the 80s – Prince Charles and Princess Diana's – and, according to UK bookmakers, has 5 to 1 odds to design Kate Middleton's dress. Only two other designers have better odds than Emmanuel, who has designed dresses for Elizabeth Taylor, Joan Collins and Ivana Trump.Back in the Garment District, Martin Greenfield, 82, is hard at work making suits for New York Mayor Michael Bloomberg and the cast of HBO's "Boardwalk Empire." The New York Times published a profile of the tailor, saying he "has been an influential face of men's fashion…from the era when men wore suites to baseball games to today, when only the fussiest of restaurants demand jackets and ties." The profile tracks Greenfield's career from when he mended an SS officer's shirt in Auschwitz to today, when he works for Rag & Bone, the CFDA's Menswear Designer of 2010. 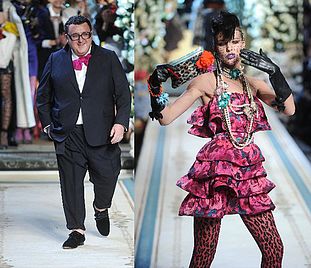 Still in style news, the Lanvin x H&M line debuted this week. Fashionistas waited on line for hours outside H&M stores around the world – Tel Aviv included - to get a chance to buy a fast-fashion version of the Lanvin couture line. The frilly dresses and skirts come courtesy of designer Alber Elbaz, who was born in Morocco and grew up in Holon, Israel, before he moved to France to take the fashion world by storm. This new collection brings dresses that usually cost thousands of dollars down to affordable prices and in larger sizes than haute couture usually offers.It may be Hanukka next week, but  some Jewish people have decided to celebrate Christmas. Following the lead of "White Christmas" composer Irving Berlin, Paul Simon is releasing blues song called "Getting Ready for Christmas Day," which is streaming on the UK Telegraph website. The song's content is mostly secular, and has a political tone to it, starting with the line "I got a nephew in Iraq/it's his third time back." This isn't the singer's first foray into Christmas territory; Simon and Garfunkel released an album called "A Very Merry Christmas" in 1966. Other famous Jewish musicians with Christmas songs include Neil Diamond, Barbara Streisand, Barry Manilow, Beck, Carole King, and Bob Dylan.No matter what holiday you're celebrating this winter, you're probably looking for gifts. If there's a comedy lover on your list, you may want to pick up the soundtrack to the hit TV series "30 Rock." The disc features a remix of the viral hit "Werewolf Bar Mitzvah," which includes cast member Tracy Morgan singing the line "boys becoming men, men becoming wolves." The remix is streaming here, and if you're not familiar with the now-classic scene, The Schmooze has the video for you.Last but not least, the Schmooze brings some eye candy, in the form People magazine's Sexiest Men Alive. Israeli mentalist Lior Suchard, who has an ongoing show at the Palms in Las Vegas, is listed in the 28 spot in the magazine's "Sexy At Every Age" section. Watch Lior Suchard work his magic on another Jewish Sexiest Man Alive, Zac Efron in July 2010:In addition to those two, this year's list of sexy males has plenty of Jewish men to ogle, including TV actors Jason Segel, Jake Gyllenhaal, James Franco, rapper Drake and "Daily Show" host Jon Stewart. Plus, "Dancing With The Stars" pro Maksim Chmerkovskiy has a Jewish father, as does Scott Caan, son of "Godfather" actor James Caan.The Weekly Schmooze collects the hottest Jewish culture news from around the world. Ranging from celebrities to philanthropy to quirky communities, we're here to schmooze about Jews.If you have any news to share with The Weekly Schmooze, write to: weeklyschoomze@gmail.com

The government's response to coronavirus is a national embarrassment By EHUD OLMERT
My Word: Return to sender - Advice from a younger self By LIAT COLLINS
Right from Wrong: Ellen DeGeneres, George Floyd and Iyad al-Halak By RUTHIE BLUM
Advertisement