By LAUREN IZSO
APRIL 7, 2014 15:44
Ryerson walk-out
(photo credit: Courtesy)
Advertisement
Post by Leila Sidiqi.
Canadian university students expressed outrage after an 11th Ontario university campus passed a motion to support the  Boycott, Divestment and Sanctions (BDS) movement.Ryerson University of Toronto, Canada was the subject of many headlines last week when a motion was passed at an annual student council meeting to support the The BDS movement, and a group of Jewish students staged a walkout during the meeting. The movement has been a source of great controversy throughout North American universities. Some students claim that the student council vote approving BDS support at Ryerson was unfair. A group of Jewish students walked out of the meeting once the motion was passed, believing that it was unjust. A video posted last week, then quickly removed, was re-posted to the Facebook account of a Ryerson student named Leila Sidiqi. The video shows the end of the meeting, when the motion was passed."It seemed like almost everyone there was Palestinian," said first year Radio and Television student Jessie Saunders-Drutz. "The BDS is simply a political movement to mask anti-Israel bigotry, anti-Semitism and generational hate."Saunders-Drutz said that she was only informed of the April 2nd meeting the night before and estimated an approximate ratio of 250 Palestinians to 25 Jewish students. "It was crazy," she added. Hillel@Ryerson, a Jewish student group on campus, also strongly condemned the vote, reported the Canadian Jewish News. The young Jewish student said when they entered the hall, they were not treated with respect. "Jeering, booing, eye rolling, hand gestures etc." She said there was a security guard specifically to deal with harassment issues, however he did nothing to stop it. 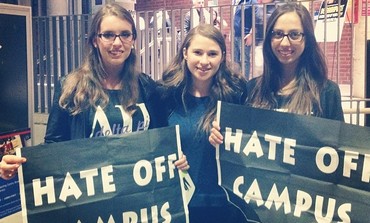 During the meeting, a member of the RSU (Ryerson Student Union) proposed delaying the vote for a year, so that students could be better educated about the issue. "The BDS [advocates] spoke out that clearly people knew about it because there were so many people there... Yes... All Palestinian! So clearly the BDS had done a great job of advertising to THEIR people but for obvious reasons didn't seem to promote as much with the rest of the students," she said.During discussions, she said the group claimed that the Israeli army was the "best-treated, most-funded, well-fed terrorist organization."The opposing side argued that this was anti-Semitic and if passed would have colossal effects to the students on campus. It would make Jewish and/or Israeli students feel targeted and unsafe on campus. One point made by a student opposed to the motion said, "if this was about targeting a country who has political injustice then why are they not targeting Syria, Egypt, China, Russia." A student group who advocated for the motion, Students for Justice in Palestine, wrote on their Facebook page that the motion passed with an 80% majority, with 1600 signatures.The Facebook post also said that members of the group found actions by the small Jewish group "extremely outrageous and an overreaction." They also said that the group should apologize, and added that their actions were "irrelevant," and motivated by "Islamaphobia."The RSU is the governing student body who are supposed to represent the entire campus as a whole, however one member of the council by the name of Jesse Root, spoke in support of the movement, a clear violation of his role, said Saunders-Drutz, and "removed all neutrality from the student union and no longer did the RSU represent the entire student body."The president of the university, Sheldon Levy, who is Jewish, has not yet responded to the passed motion.