Visiting youth join with 500,000 Jews from a variety of backgrounds, travel to Meron, a mountain village a few miles west of Safed. 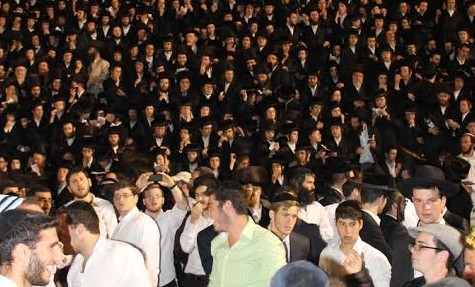 Photo courtesy Or HaRashbi Spokesperson In Jewish Law, Lag Ba'Omer, the 33rd day after Pesach, is a cessation of the semi-mourning restrictions between Passover and Shavuot, when marriages, hair-cutting and live music all become permitted.It is on this day that nearly 500,000 Jews from a variety of backgrounds, travel to Meron, a mountain village a few miles west of Safed.But why? One of the most influential scholars in Jewish history, Rabbi Shimon Bar Yochai, is buried on the top of Mount Meron. His wisdom is found in the Mishnah, Gemorrah and Midrashim, and the Zohar (foundational text of Kabbalah) revolves around his revelations to his inner circle of disciples.During the hours before his passing, on Lag Ba'Omer, he disclosed the "most sublime" secrets of Torah, in order to ensure that the day would always be an occasion for great joy, untouched by sadness because of the Omer period and mourning for him.  The annual pilgrimage to his grave-site in Meron pays homage to his contributions in the field of Jewish thought and celebrates his influential and awe-inspiring life.I am here with a small group of people from my gap year program 'Aardvark Israel', as well as a mix of Jews from around the world who are all here for the same reason; to visit the grave of Rabbi Shimon Bar Yochai and celebrate his life in Meron.We spent Shabbat in Safed, at the Tel Aviv Hotel participating in an educational program through Ascent.After participating in a vivacious musical havdalah, we make our way to Meron at about 11pm by bus. The atmosphere on the bus is joyful; people are excited to be in Meron and visit the grave of one of the most influential scholars in Jewish history. We are singing any song that comes to mind, ecstatic to be a part of something that has been a tradition for generations.When we get to Meron, there is a buzzing form of energy present as we walk towards the foot of the mountain; Jews from all backgrounds but mainly religious Jews are singing, dancing and walking around frantically. We decide as a group that we want to make it to the grave; a near impossible task because hundreds of thousands of other people are thinking the exact same thing.We make our way to the grave and join the massive group of people wishing to enter. Slowly but surely we proceed forward, with other women squashing, elbowing and pushing us with a great deal of force. At one point we lift our feet off the ground and realize we are still being carried forward by the crowd. At the entrance to the women's section, we get pushed forward and almost thrown inside by the huge crowd. Inside, women are crying, praying and focusing solely on Rabbi Shimon Bar Yochai. We spend some time inside, taking it all in; it was overwhelming to say the least, but also awe-inspiring.Finally we made it through and meet up with the others before we leave. We all agreed that it was an amazing feeling, to be a part of something so significant to Jewish people all over the world. We feel happy. We feel alive.