Prime Minister Binyamin Netanyahu addresses the general assembly of the Jewish Federations of North America at the Binyanei Ha'uma convention center in Jerusalem.

By SARA MILLER
NOVEMBER 10, 2013 18:36
Netanyahu at Jewish Federations GA 3 370
(photo credit: Sam Sokol)
Advertisement
The general assembly of the Jewish Federations of North America got off to a gregarious start on Sunday afternoon, as hundreds of Jews from all over the world gathered at the Binyanei Ha'uma (convention center) in Jerusalem.The convention center was transformed by dozens of booths and stalls, taken by Jewish charities and NGOs, Israeli businesses and even felafel and shawarma stands. Pride of place in the center of the lobby was taken by a mock market stall - no doubt signifying this year's theme of "the global shuk".Tweets about "#JFNAGA"
The night's guest of honor was Prime Minister Binyamin Netanyahu, who was expected in his speech to repeat his warnings about striking a "bad deal" with Iran over its nuclear program. Although an agreement had not been reached in the three days of talks in Geneva between Iran and the international community, the US is expected to be prepared to offer a reduction in the crippling sanctions on Iran in return for a partial halt in uranium enrichment by Tehran. 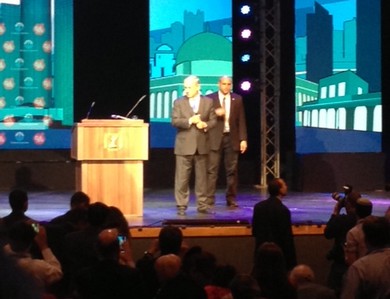 Netanyahu at the Jewish Federations General Assembly in Jerusalem. (Julia Franks)The annual general assembly of the Jewish Federations is held in a different location in the US and Canada every year, and in Israel once every five years. The conference is known for attracting big names, and this year is no different - the scheduled speakers also include President Shimon Peres, Finance Minister Yair Lapid and Economy Minister Naftali Bennett.
Advertisement
Subscribe for our daily newsletter