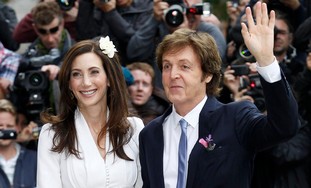 Mazal tov Paul McCartney! The ex-Beatle married Nancy Shevell, a businesswoman and member of the tribe, in London last Sunday. McCartney's first wife Linda, who died of breast cancer in 1998, was also a New York Jew, and their daughter Stella McCartney custom-made Shevell's dress.
Ben Stiller has gotten a lot of mileage out of jokes about his Judaism, but even he admits that he's not Jewish according to everyone's standards. On last week's Saturday Night Live, Stiller explained "My father is Jewish, my mother is Irish Catholic, which means according to the Torah, I'm not actually Jewish. But according to all mirrors, I am." Cue snare drum. Stiller explained in his SNL monologue that it was right after Yom Kippur, and he was feeling a bit woozy  from fasting, when suddenly, Jewish Willy Wonka – also known as Gene Wilder, also known as Andy Samberg in costume – took him to a Jewish culinary wonderland. "There is no food I know that compares to good delicatessen – if it's bad, that's good too, because it's also fun complaining," the two Jewish (sort of) comedians sang.Since we're already on Jews in comedy, The Guardian put together a list of Woody Allen's top ten jokes. There are definitely a few good ones missing, but it's worth a read. Of course, classics like Annie Hall and Manhattan are represented.In the meantime, Roseanne Barr's new sitcom, Downwardly Mobile, has been picked up by CBS. The show is about residents of a trailer park, and will be written with help from Eric Gilliland, who has worked on The Wonder Years and That 70s Show. Her previous foray into network television, Roseanne, lasted nine years.Tel Aviv. Paris. Milan. Holon? Yes, the city south of Tel Aviv is set to host its third Fashion Week after Succot. Some of the major names that plan to attend include designer Zac Posen, fashion writer Stephanie LaCava and Imran Amed, editor of the "Business of Fashion" website. The event is set to take place on October 24-27. More information can be found here.

It's too late for Yom Kippur, but if you're living in New York and you're looking for a synagogue for Succot, check out the New York Observer's list of "New York's Power Congregations." On the list are Congregation Emanu-El ("the Yankee Stadium of Reform Judaism"), The Fifth Avenue Synagogue (noted mostly because Bernie Madoff associate Ezra Merkin is a congregant), and Lincoln Square Synagogue (which holds a special fashion week minyan for the likes of Posen and Diane von Furstenburg). The Weekly Schmooze collects the hottest Jewish culture news from around the world. Ranging from celebrities to philanthropy to quirky communities, we're here to schmooze about Jews. If you have any news to share with The Weekly Schmooze, write to:weeklyschmooze@gmail.com
Advertisement
Subscribe for our daily newsletter