Weekly Schmooze: Oy! To the World

"Jewish Christmas" seems to have takenover the Internet this year. What is "Jewish Christmas," you ask?Well, it's that day of the year that Jews outside of Israel don't have to workand spend their time watching movies and eating Chinese (or any other ethnicitythat doesn't close restaurants on December 25) food. The New Republic's MarcTracy penned a lovely essayon his love of Christmas as a Jew. Buzzfeed listed 30 Jewish moviesto watch on Christmas and things Jews are sick of being asked about Christmas, with great gifs of Jewish actors. This SouthPark classic is looking pretty irrelevant (but still funny) this year:

The Sundance Channel held a Mel Brooks moviemarathon called "Oy! To the World" this week, and in honor of the event, Buzzfeed interviewed Brooks. The legendary Jewish comedian and filmmaker said he thinkshumor "is all the same now" and that there's no uniquely Jewish humoranymore. 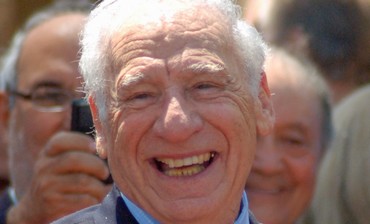 The new (non-Jewish) year is around the corner,which means a new season of HBO's "Girls" is on the way. LenaDunham's Hanna Horvath and her friends are back with new adventures inBrooklyn, and, as always, Zosia Mamet's Shoshanna has the bestone-liners.

Mamet's dad, acclaimed playwright David Mametis developing a miniseries about the seven deadly sins, Variety reports. Though Mamet is Jewish, he will focus onChristianity's seven biggest no-nos. "The themes invoked by the sevendeadly sins will serve as a backdrop of a series of interconnected stories thatreflect on the human condition through Mamet's distinctive lens," theentertainment magazine explains.The Maccabeats visited Katie Couric thisweek and performed their a capella version of Matisyahu's "OneDay."

If you haven't been following the Schmoozeclosely all year, the National Jewish Outreach Program has the top Jewish viral stories of the last year, from Jewish sisters HAIM's rise to fameto Thanksgivikkuhto Jennifer's Bat Mitzva shirt.

Make sure to check out this articleabout Ben Stiller's trip to Israel as a teen and how he managed tosqueeze in some inappropriate behavior by the Western Wall.

If you have any news to share with The Weekly Schmooze,writeto: [email protected]