Documentary TV series "One is Treblinka: Hitler’s Killing Machine" features tile with Star of David said to be affixed to chamber.

By TOM TUGEND
Tile with Star of David found at Treblinka
(photo credit: SCREENSHOT YOUTUBE SMITHSONIAN CHANNEL)
Advertisement
LOS ANGELES – An archaeologist featured on a TV documentary series unearthed what may be some of the only physical evidence of the gas chambers at the death camp. In the series "One is Treblinka: Hitler’s Killing Machine" Caroline Sturdy Colls, a forensic archaeologist from Staffordshire University in the UK, uncovers new scientific evidence on the existence and mechanism of the death camp.While Auschwitz has become shorthand for the Holocaust and a pilgrimage site for more than a million visitors each year, very few pay homage to the victims at the other death factory, Treblinka.The reason is simple.The complex, 65 miles northeast of Warsaw, consisted of Treblinka I, primarily a forced labor camp, and Treblinka II, the site of the killing machine, closed in 1943 after 24 months of operation.During that timespan, its 10 gas chambers asphyxiated 900,000 men, women, and children. The grisly work done, the Nazis went to extraordinary lengths to erase every trace of the camp’s existence. 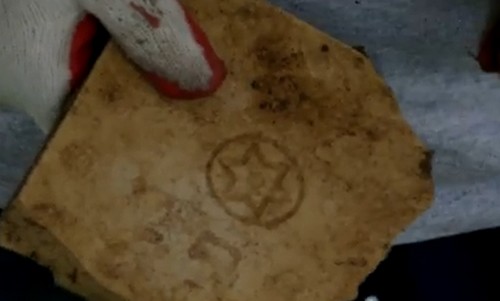 Tile found at Treblinka (Credit: Youtube screenshot)SS chief Heinrich Himmler’s men destroyed all structures, filled in and leveled the earth above, and even installed a Ukrainian “farmer” in a newly built farmhouse. Viewed from the ground and from the air, Treblinka appeared as peaceful farmland and forest, without barracks or gas chambers and marked later only be a stone monument.Given the absence of visual evidence, Holocaust deniers around the world focused on Treblinka to claim that it was really a transit camp rather than a killing ground. Six years ago, Colls arrived determined to dig underneath the placid surface.The documentary Treblinka follows the painstaking work of Colls and her small team, whose task was to pinpoint the most promising excavation sites. Through sophisticated aerial photography, which created a picture of the landscape without foliage, the team detected faint imprints on the ground that pointed to the original foundation of the camp.Inch by inch, the team carefully dug two trenches, which yielded no evidence.Finally, in a third trench, Colls found human bones, but, more importantly, broken tiles imprinted, incongruously, with the Star of David.What was the significance of this strange discovery? Two of the few living Treblinka survivors testified that the Nazis disguised the front of gas chambers to resemble a mikvah, or ritual bathhouse, complete with tiles bearing the Star of David.Colls at times breaks down at the horror of her discoveries, but the film’s emphasis is on the scientific approach she brings to the project. Indeed, the Smithsonian Channel is presenting Treblinka as part of its month-long Women in Science series. 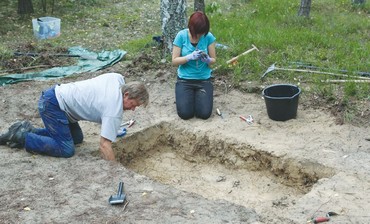 Forensic archaeologists excavate the site of the Treblinka. (Credit: Reuters)