Aussie Census 2011: 7 types of Christians, but no Jews

Jews Down Under urged to identify as "Jewish" in compulsory national survey, despite religion not being specifically listed on forms.

By elana kirsh
AUGUST 9, 2011 11:43
Sydney 311
(photo credit: Reuters)
Advertisement
Australian Jews were miffed on Tuesday, after the country's census form failed to include 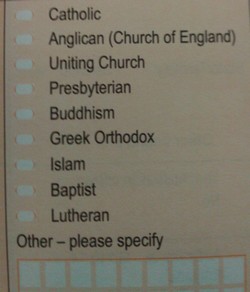 Question 19 on the 2011 form"Jewish" as an option for Question 19 - religion. The questionnaire lists seven different Christian denominations, as well as Buddhism, Islam and "Other - please specify." Both the online and the printed forms also listed "No religion" as an option.According to the last Australian census, taken in 2006, the Jewish population was 88,834, though numbers are estimated to be far higher, up to 120,000. Some 12 million Australians identified as Christian in 2006, 340,000 as Muslim and 418,000 as Buddhist.RELATED:
Let's get to work (Premium)Last week, the Australian Jewish News ran an article explaining that in the past, the survey has "failed to collect accurate data on the Jewish population because a significant portion of the community are believed to opt out of the faith questions – either because they are Holocaust survivors who are concerned about being identified, are secular and choose not to identify, or are living overseas." The article urged Australian Jews to identify as Jewish in this year's census, in order to get accurate data.

Question 19 on the 2011 census formFilling out the census form, which includes 60 questions, is compulsory for all residents, with fines of $110 a day applicable for those who fail to submit the form.Also this week, the Australian Associated Press reported that the Australian Bureau of Statistics (ABS) was hoping that Star Wars-flavored joke from the 2006 census would not be repeated, according to ABS head Paul Lowe. In 2006, 55,000 Australians marked their religion as "Jedi," according to the AAP.In this year's census, same-sex couples who have wed abroad will be able to mark their union for the first time, the AAP report added. Meanwhile, The Atheist Foundation of Australia launched a campaign entitled "Mark No religion" earlier this year, encouraging non-believers to identify with atheism rather than the religion into which they were born. The awareness group was looking forward to seeing accurate data on the numbers of believers and non-believers. Eighteen percent of the population identified as "no religion" in 2006.The ABS reached out to younger Australians with this year's survey, according to the Brisbane Times. A twitter campaign, using the tag @2011Census marked "dream results," pulled over 12,000 followers.
Advertisement
Subscribe for our daily newsletter