Posters call haredim to go to "war" over graves; MK Lipman calls for action against “rabbis who incite to violence.”

Haredim protest construction of housing units on possible grave site, August 12, 2013.Haredi extremists rioted in Beit Shemesh on Tuesday, marking the second day of violent protests against the erection of housing units on land they claim contains Jewish graves.The protesters were dispersed after only several hours, managing to inflict minor damage compared to Monday’s full-blown riot in which hundreds of meters of hillside abutting the construction site were torched.Meanwhile, one of the most senior haredi rabbis in Israel, Rabbi Haim Kanievsky, has been called in to deal with the ongoing controversy surrounding the Goloventzitz building site in Beit Shemesh.Rafi Goldmeier, a local resident who witnessed the final stages of Tuesday’s protests, noted on Facebook that compared to yesterday’s events “there was nothing too exciting going on.” “When a police car drove up, they all screamed ‘Nazi’ as they surrounded the car,” he said.Security guards employed at the Goloventzitz site in Ramat Beit Shemesh, where the new Ramat Avraham neighborhood is slated to be built, said they estimated that between 100 and 150 protesters were present on Tuesday.Several rabbis spoke to the crowd in Yiddish, excoriating the developers and the rabbis backing them. Among the speakers was Rabbi Moshe Zorger, a Satmar rabbi from Jerusalem affiliated with the Eda Haredit.Guards employed by the developers stopped several haredi protesters as they attempted to climb under the fences, leading to clashes in which members of the crowd hurled stones. Guards responded by throwing rocks of their own, according to witnesses.“The security started throwing stones. Big stones,” said Moshe, a yeshiva student from Jerusalem who came to protest. “We’re not here to fight them. We’re here to stop the digging. They might even be their grandfathers over there. Who knows.”As the clashes died down, some of the remaining protesters set fire to brush adjacent to the entrance of the site, setting alight a billboard announcing the contested development. 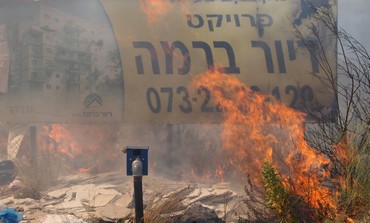 Thick, acrid smoke drifted across the road as the final stragglers left the area. “Eventually they lit a fire in the weeds on the mountainside,” Goldmeier recalled. “I immediately called the fire station.While it was burning, it caused a close-by water pipe to explode, dousing the fire with a heavy spray, keeping it relatively small until the fire truck got there.”Posters placed in haredi neighborhoods called upon residents to go “to war” over the issue of graves and to flock to Ramat Beit Shemesh to “stop the [construction] with their bodies.”Of the 29 people arrested yesterday during the riot in Beit Shemesh, 20 had their remand extended until tomorrow since they refused to identify themselves.Seven other suspects were released on conditional terms, including an order banning them from the Goloventzitz site.In response, Yesh Atid MK Dov Lipman, a Beit Shemesh resident, called upon security forces to take swift action against rabbis who incite their followers to engage in violent activities.“After two days in which extremists lit fires in our beloved city of Beit Shemesh, we can no longer sit quietly,” he said. “We are dealing with something which is endangering the lives of the residents of Ramat Beit Shemesh and the entire area.”Lipman said that rioters “cannot be released to their homes but must experience the full strictness of the law,” as must “those who sent them – the rabbis who incite them.”The residential apartments project has been stalled for over two years, due to claims by the haredi Atra Kadisha organization that there may be Jewish graves at the site, something that might prohibit construction according to Jewish law.Kanievsky, perhaps the most authoritative haredi rabbi after current acknowledged haredi leader Rabbi Aharon Leib Shteinman, was approached on Monday night by the leaders of Atra Kadisha at his home, according to haredi news website Kikar Hashabbat.Following a lengthy discussion on the issue, Kanievsky decided to appoint a panel of three rabbis to rule on the matter. The rabbis on the panel are Rabbi Shmuel Halperin, rabbinical judge Mendel Lubin and rabbinical judge Yisrael Marmarosh.Work has stopped for the time being at the construction site.Over the past two days, accusations have been made from several quarters that the two-year opposition to construction and the current protests by the hardliners from Atra Kadisha are being carried out as a form of extortion, in order to receive money in return for inspection, oversight and approval of the project.Atra Kadisha strongly denies this claim, saying that it is acting in accordance with Jewish law and the ruling of the head of the Eda Haredit, Rabbi Yitzhak Tuvia Weiss.Property owner Arye Goloventzitz also visited Kanievsky Monday night, to protest both the violence at the site as well as the physical attack he suffered last week in which he was beaten at his home, apparently in connection to the controversy.Goloventzitz and the Binyan Shalem company, which is overseeing the building project, say they are acting in accordance with the ruling of Eda Haredit second-in-command Rabbi Moshe Sternbuch, who ruled that it was permitted to build at the site.Hiddush, a religious freedom campaigning group, said that rioting committed by extremists connected to Eda Haredi were becoming an annual phenomenon during the summer.“It seems like its not so important what they’re protesting about and why they’re throwing stones, the most important thing is that the stones are thrown and donors receive the pictures,” said Hiddush’s director, attorney and Reform Rabbi Uri Regev. “The protests and violence are renewed each year because the hooligans know they won’t pay a price. Only if the criminals will be swiftly brought to justice and the court will impose custodial sentences of a punitive nature will there be any chance to eradicate the phenomenon.”Regev also noted that the dispute over the graves reflected a broader dispute within the Eda Haredit “over personal interests and money,” being expressed by violence committed by haredim towards other haredim.“This fact should serve as a lesson to the haredi public regarding one of the fundamentals of hooliganism: Someone who is silent when violence is perpetrated against others is likely to be the next victim of such violence.”Lipman also called for strict measures to be taken against violent protesters, saying their actions endangered the lives of Ramat Beit Shemesh residents.“We cannot allow concern for the dead to come at the expense of the welfare of those who are alive. This is a desecration of God’s name and disgraces Judaism,” said the MK.
Advertisement
Subscribe for our daily newsletter