Celebs, MKs show off their festive side by donning costumes on Purim 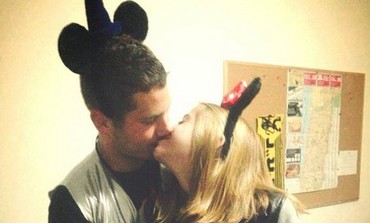 Avner Netanyahu, the son of Prime Minister Binyamin Netanyahu, shares a Purim kiss with his girlfriend. (Facebook)The Jewish holiday of Purim is a festive time when celebrities and dignitaries show off their colorful costumes, and this year was no exception.
Madonna and Bar Refaeli used their Instagram accounts to allow their devoted fans a glimpse of how they celebrated the holiday.

Meanwhile, Israeli lawmakers from opposite sides of the political aisle offered a tongue-in-cheek moment of levity by dressing up as one another. Orit Struck, the member of Knesset who represents the pro-settler Bayit Yehudi faction, dressed up as Meretz MK Michal Rozin in retaliation for Rozin’s depiction of Struck in the Peace Now-produced satirical video that has gone viral in recent days.
Post by ‎מיכל רוזין‎.
Advertisement
Subscribe for our daily newsletter