Haredi extremists riot in Beit Shemesh against the erection of housing units on land they claim contains Jewish graves.

Video by Sam SokolViolence in Beit Shemesh continued for a third day on Wednesday at the Goloventzitz construction site where a haredi faction claims there may be Jewish graves which must not be disturbed.According to the police, approximately 50 haredi men connected to Atra Kadisha, the organization opposing the building project, gathered to protest against the construction work which has since restarted. Police arrested three men for causing an affray, one of whom was lightly injured and sent to Hadassah University Medical Center in Jerusalem’s Ein Kerem. A police officer was also mildly injured and was treated at the site. 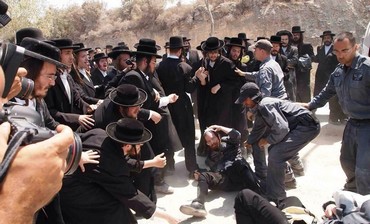 Haredim protesting construction at alleged site of Jewish graves in Beit Shemesh clash with police (Sam Sokol)In accordance with instructions by senior haredi leader, Rabbi Haim Kanievsky, Rabbinical Judge Mendel Lubin arrived at the site on Wednesday morning, along with Rabbi Moshe Boier to inspect the site to rule on the matter, but ultimately did not carry out the intended checks.According to Ahrale Yakter, chairman of the Association for the Prevention of Desecration of Graves, the rabbis requested that Rabbi Shmuel Solush be present, an expert on Jewish grave sites for Atra Kadisha.Their request was refused and the rabbis decided not to enter the site without Solush.Yitzhak Weiss, a haredi journalist connected to Atra Kadisha, said that security personnel employed by Binyan Shalem, the company overseeing the construction project, refused entry to Solush and noted that the work was continuing against the instructions of Kanievsky.The matter has now been appealed to the High Court of Justice, which has requested that the Goloventzitz brothers who initiated the project and the Israel Antiquities Authority respond to the claims in the petition by the beginning of next week.
Advertisement
Subscribe for our daily newsletter