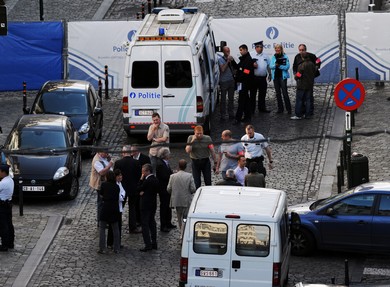 PARIS – Police announced on Sunday that they had arrested Mehdi Nemmouche, a 29-yearold French citizen, for the May 24 shooting at Brussels’s Jewish Museum that resulted in four deaths, including two Israelis.Nemmouche, who served time in prison in 2009 and 2012, was detained on Friday in Marseille. According to a police source he had in his possession a Kalashnikov assault rifle, another weapon and video recordings of the crime.The French radio network RTL reported that investigators had found a memory stick with footage showing Nemmouche carrying a weapon. Local media said he also had press clippings of the shooting.According to these reports, the arrest resulted from a random drug-related check at Marseille’s bus terminal.French President François Hollande confirmed that a suspect had been arrested and repeated his country’s determination to do all it could to stop radicalized youths from carrying out attacks.French media reports said Nemmouche was also suspected of having stayed with jihadist groups last year while in Syria, where Islamist insurgents have been playing a major part in the three-year uprising against President Bashar Assad.Muhammad Merah, the Franco- Algerian who died in a police shootout in Toulouse in March 2012 after killing three soldiers and four Jews, three of them children, also had links with Islamist insurgents. His sister, Souad, has since disappeared and is believed to be in Syria with a companion and her four children.Far-right National Front leader Marine Le Pen said that “there must be a lot of Merahs coming back [to France] from Syria.”According to intelligence specialists, the largest number of European jihadists is in Belgium, a country with a sizable number of North African Arab immigrants.Hollande told reporters: “We will monitor these Jihadists and make sure that when they come back from a fight that is not theirs, and that is definitely not ours... they cannot do any harm.” The message “to these jihadists is that we will fight them, we will fight them and we will fight them,” he said. In April, France announced new policies aimed at preventing young French Muslims from becoming radicalized, partly by barring them from going to Syria to fight in the civil war. France has estimated that about 700 of its nationals are directly or indirectly involved in the conflict there.Lepoint.fr, a French website, lawyer, Salifa Badaoui, as saying that “he was not frequenting the mosque [and] was not talking about religion at all....He became radical only in jail, after falling into minor criminality during his adolescence.”Members of the suspect’s family said they heard the “bad news on TV.”“We are shocked.... We didn’t expect this,” an aunt told reporters in Turcoing, adding that Nemmouche had not been in touch with the family since 2000.Another family member, speaking anonymously, said the young man had reappeared suddenly in 2012 after being in jail and before disappearing once more.“It is a horrible act, hateful,” said a third family member.Belgian federal magistrate Erik Van der Sypt told Reuters that a judge in Belgium had issued a European arrest warrant and the country would be seeking Nemmouche’s extradition.European Jewish Congress president Moshe Kantor praised French and Belgian authorities for the arrest.However, he accused them of having acted quickly only “after the fact.”“There is a wave of terror against the Jews in Europe,” Kantor said in a statement, “and we need far greater cooperation and resources to catch these people before they act, to clamp down much harder on the spread of hate, and focus on gathering intelligence on potential threats, especially against those who [would] become global jihadists by traveling to places like Syria, where they learn hate, terror and murder.”If prevention isn’t set as the highest priority, he warned, “we will see these types of attacks more frequently, against all populations.”A solidarity mission of the World Jewish Congress to Brussels is set to take place on Monday in response to the museum shooting. It will be led by WJC president Ronald S. Lauder and include more than 30 senior representatives of Jewish communities from around the world.The delegation is scheduled to hold talks with Belgian Prime Minister Elio Di Rupo, Foreign Minister Didier Reynders, Interior Minister Joëlle Milquet, Justice Minister Annemie Turtelboom and others, including Maurice Sosnowski, president of CCOJB, the roof body of Belgian Jewry.Francoise Scatigna contributed to this report from London.