By LAHAV HARKOV
AUGUST 4, 2011 14:01
weekly schmooze 311
(photo credit: Courtesy)
Advertisement
With protesters taking to the streets and pitching tents, Prime Minister Binyamin Netanyahu might feel a bit silly when he sees this video by Noy Aloosh, the man best known for creating the Gaddafi techno song. Aloosh took an interview, in which Netanyahu said the whole Middle East is shaking, while Israel stays stable, combined it with some clips from the housing protests, and voila! A new club hit is born.A lead has been found for the revival of Funny Girl,  the classic Broadway musical about Jewish vaudeville performer Fanny Brice, which originally starred Barbra Streisand. No, it's not Lea Michele, who sang two Funny Girl numbers on Glee. It's former Six Feet Under star Lauren Ambrose. Ambrose has filled Streisand's shoes before – her band, Lauren Ambose and the Leisure Class, performs the song “My Man” from the musical.A Jewish bachelor won big on reality TV this week. Bachelorette Ashley Herbet decided that Jewish contestant J.P. Rosenbaum, a construction manager from Long Island, is her bashert on the show's finale Monday night. The ending was hardly surprising, as a few episodes before, Ashley told J.P.'s mom that she is “smitten” with him. Mazel tov! 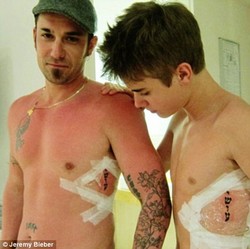 Justin Bieber gets tattoo with his fatherRemember when Justin Bieber visited Israel and got a tattoo that says “Jesus” in Hebrew? Well, it turns out that he went with his dad, Jeremy Bieber, and two have matching ink. Bieber Senior posted a picture on his blog: Here's an Israeli hasbara success: Israeli modeling agency Elite Models threw a party in Tel Aviv last week, and Fashion TV decided to cover it. The video highlights Esti Ginzburg, the biggest Israeli model at the moment after Bar Refaeli. Otherwise, it's mostly models drinking and dancing, but if you're into that, here's the video:Israeli author Etgar Keret is known to be a bit wacky, so maybe it shouldn't be surprising that he has adopted the world's thinnest house as his studio. Polish architect Jakub Szczesny designed the 28-inch-wide house, which is located in Warsaw, especially for Keret. The house , which looks a bit like a tampon, is officially called an “art installation,” because it does not meet Polish building codes, and was designed as a meeting place for intellectuals and young people – who are very, very skinny.Have you ever played Sudoku and thought “this game just isn't Jewish enough?” Well, there's an iPhone app for you: Judoku. The game has two options: Arrange Hebrew letters, or arrange Jewish symbols, such as a Torah or a shofar. The game has a little cartoon rabbi as its logo, and as the app's site reads: “Oy! Is this a meshuga game or what?”The Weekly Schmooze collects the hottest Jewish culture news from around the world. Ranging from celebrities to philanthropy to quirky communities, we're here to schmooze about Jews. If you have any news to share with The Weekly Schmooze, write to: weeklyschmooze@gmail.com