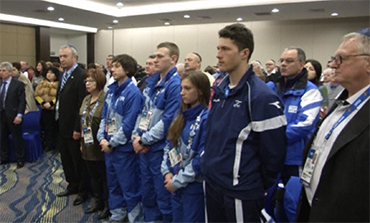 Representatives of the Russian Jewish community held a memorial service on Sunday to remember the 11 Israelis taken hostage and killed at the 1972 Olympics in Munich and to celebrate the five Israeli athletes competing in the Sochi 2014 Winter Games.On September 5, 1972, members of the Israeli Olympic team were taken hostage at the poorly secured athletes' village by Palestinian gunmen from the Black September group. Within 24 hours, 11 Israelis, five Palestinians and a German policeman were dead after a standoff and subsequent rescue effort erupted into gunfire.Chief Russian Rabbi Berel Lazar said the memorial was meant to connect and embolden the Jewish diaspora."So when you think of the history of Israeli athletes going to different Olympics, mentioning the Munich '72 massacre, is...always tell us you know being Jewish sometimes is not as comfortable as you would like it to be. But it really depends on us to move forward, not be ashamed and then the people around us are going to understand that we are here to stay and we are open about it," Lazar said.Andrea Davidovich, a US-born Israeli figure skater, said she felt close to the 1972 athletes."I feel like we are representing them and what they couldn't achieve because of people who are against us, and we have to all be together the way were were greeted today and stand behind each other, because we're Jewish and we are all a part of this community and have to support each other," Davidovich said.Widows of two of the athletes who were killed have long campaigned for the 1972 victims to be remembered at Olympic opening ceremonies.Figure skater Evgeni Krasnopolski said the opening ceremony should incorporate a moment of silence for every athlete killed during the Games."I think every time, at every Olympics there should be a moment of silence for those who died at the Olympics, not important whether from terrorism or training or in competition. I think there should always be a moment of silence at every Olympics - summer and winter," he said.An International Olympic Committee (IOC) spokesman said the IOC remembered the victims in other official ways - with services and by the statues in Munich commemorating the tragedy.