We should realize these tragic events reflect human disobedience of God, and cause God sorrow and regret. 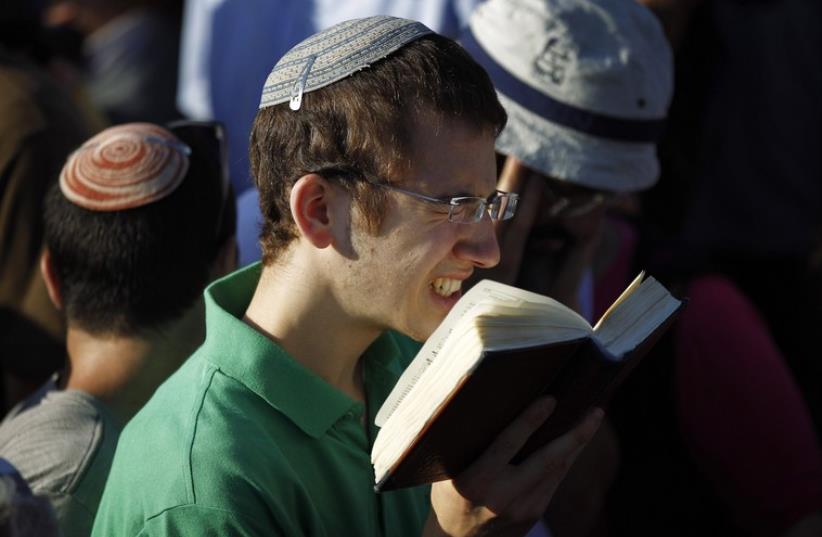 A Jewish youth prays during the joint funeral of three Israeli teens who were abducted and killed in the occupied West Bank, in the Israeli city of Modi'in
(photo credit: REUTERS)
Advertisement
When terrible tragedies such as the recent murders of three teenage boys occur, religious people often automatically react by accepting whatever has happened as the will of the Almighty.Following the example of the biblical Job, who said to his wife, “Should we accept only good from God and not accept evil?” (Job 2:10), people often do not question what has happened – but accept it as a decree from on high.There are many times, however, when the tradition does question, wondering why the Almighty has permitted such terrible deeds to occur.“My God, my God, why have You abandoned me?” asks the Psalmist (Psalm 22:2).Moreover, an ancient midrash (Genesis Raba 22:4) interprets the verse in Genesis 4:10 “Your brother’s blood cries out to Me from the ground!” with the parable dealing with the question of why the cry is unto God: It is similar to two gladiators who are struggling in combat. Had the king wanted to, he could have separated them. Since the king did not wish to do so, one overpowered the other and was killing him, when he cried out and said, “Let my case come before the king!” but there was no answer.The implication is that it is legitimate to ask why the Almighty did not stop Cain.Both of these reactions share one thing in common: The assumption that what occurred reflects God’s will, even if we do not understand the reason for it. Yet the story of Cain and Abel itself, the Torah’s account of the first murder – which is intended to be a parable of every murder – makes it very clear that evil deeds such as Cain’s murder of his brother Abel are not the will of God, and do not in any way reflect God’s will.On the contrary, they are the very opposite. The story tells us clearly that because human beings have free will, they can do evil. Like Cain, they can give in to the inclination to sin “that crouches at the door,” rather than overcoming it. God warns Cain about this, but has no hand in Cain’s decision nor stops him, for to do so would be to deny human beings freedom of will.The lesson to be learned from this is clear: Tragedies such as these are not the will of God, but the doing of human beings who have succumbed to evil. As Abraham Joshua Heschel once said, “History is the arena in which the will of God is defied.” Therefore a religious person need not take the position that God has acquiesced to, if not actively caused, these events.Certainly, one need not believe in the outrageous ideas expressed by some religious leaders that such terrible events are God’s punishment because of things done that they disapprove of, such as cutting yeshiva subsidies or enacting anti-religious legislation.We live in a world which is beset by tragic events caused by human beings who do not follow the laws of morality that God has decreed. Murder, rape, child abuse, war, kidnapping and the entire range of terrorist activities are everyday occurrences.The Torah acknowledges this in the story of the Flood, in which “the Lord saw how great was man’s wickedness on earth, and how every plan devised by his mind was nothing but evil all the time. And the Lord regretted that He had made man on earth, and His heart was saddened” (Genesis 6:5-6). One must wonder if the Lord is not saddened and regretful in more modern times as well.It is all very well to continue to praise God and acknowledge God’s existence when confronted by tragedy and suffering, just as we do when things go well, but this need not imply that the suffering comes from God or reflects God’s desires. On the contrary, we should realize these tragic events reflect human disobedience of God, and cause God sorrow and regret.As the prophet said in Isaiah 63:9, “In all their troubles, He was troubled.” In Heschel’s phrase, “Israel’s suffering is God’s grief.” God is with those who suffer, and not with those who cause suffering.The question we should be asking, then, is not “Where was God?” but “Where was man?” Why do people do these things, and why do others not prevent them?The writer, former president of the International Rabbinical Assembly, is a two-time winner of the National Book Award. His latest book is The Torah Revolution (Jewish Lights).