The company’s ambitions for the region have sparked a home-grown competitor. 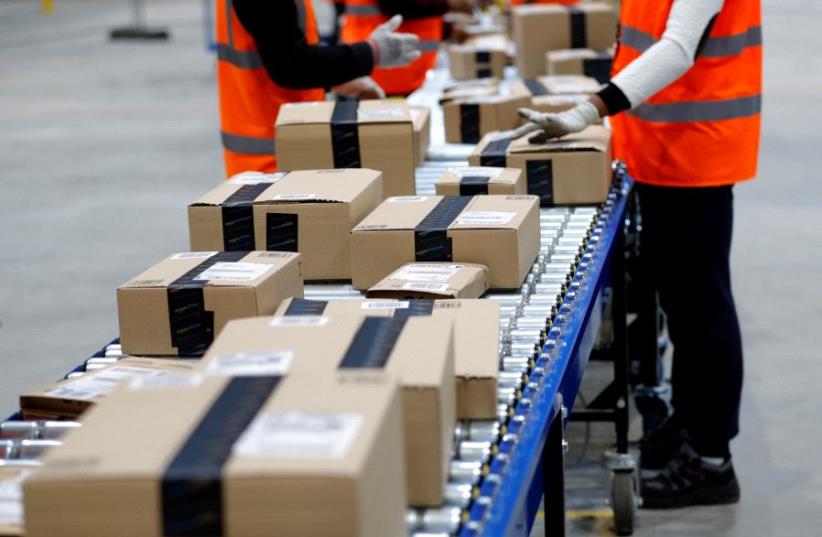 Employees sort packages at the Amazon distribution center warehouse in Saran, near Orleans, France
(photo credit: REUTERS)
Advertisement
E-commerce behemoth Amazon is preparing to launch a new Middle East website to expand its business in the region. Already the world’s largest internet shopping platform, the company has its eye specifically on the United Arab Emirates’ lucrative market.Two years ago, Amazon purchased Dubai-based online retailer Souq.com for $580 million. Until now Amazon relied on the acquisition—an English-Arabic language e- commerce platform geared to local consumers—to sell products and services in the region.However, analysts believe the tech giant is slowly trying to shift traffic onto its own website, which will help U.S.-based sellers expand, while phasing out Souq.com. The new online site would reportedly resemble the Amazon UK or Amazon Germany ones.“Amazon has done very little with Souq.com so far because the latter is already a well- established brand with a very good seller and buyer base. So the business has not needed much tinkering with so far,” Andrew Kitson, Head of Telecoms, Media and Technology Industry Research at London-based Fitch Solutions, told The Media Line.“But we have seen an increased use of Amazon in web search traffic and e-commerce.The company may well be feeling that the time is right to dial down the Souq.com brand and bring Amazon more to the fore.”With its new project, Amazon is using the UAE and Saudi Arabia as a springboard into the rest of the region, Kitson explained. It will also seek to expand its IT, web services and cloud computing sectors which involves setting up data centers and working with local internet and telecom service providers.“So if they are going in with the Amazon brand on that side, it makes sense to push the Amazon brand on the consumer side as well,” he said.Products that have done well in Dubai’s thriving e-commerce market include jewelry, clothing, footwear, apparel, makeup and electronics. Amazon will seek to replicate these successes throughout the region.“The food sector is less successful as shoppers tend to be traditionally minded, preferring to shop locally,” Kitson noted.Amazon’s ambition for the region has also sparked competitors. Dubai real estate magnate Mohamed Alabbar recently launched Noon.com with the help of government funds and private Gulf investors. The company is already building distribution centers in Saudi Arabia (in Riyadh and Jeddah) and a massive warehouse in Dubai.“We expect to become a world player but will concentrate firstly on Saudi Arabia and the United Arab Emirates,” Alabbar recently said of his company.Matthew Reed, a Dubai-based analyst for Ovum, a technology consultancy firm, told The Media Line that Noon.com was set up about 18 months ago. “Despite its grand plans when it was unveiled, the launch was delayed by quite a long time and there were reportedly quite a lot of operational problems.”The Middle East e-commerce market is still quite underdeveloped so there is good potential for growth and for a global player like Amazon to lead, he explained.Turning to Amazon’s acquisition of Souq.com, Reed added that there is still speculation as to the plan of phasing it out. “It could be that Amazon has calculated that using its own brand might be more effective and perhaps also that using its own tech systems will allow it to expand and offer services that perhaps it cannot through Souq.com.“That would be significant for the Middle East e-commerce market,” he continued, “but Amazon might face challenges which could be political as much as commercial. A while ago Alabbar said global giants like Amazon were a threat to local businesses.”There was also a campaign in Saudi Arabia to boycott Amazon because of CEO Jeff Bezos’ purchase of The Washington Post for which Saudi dissident Jamal Khashoggi served as a contributing columnist.“But it is unclear if this campaign had any effect,” Reed concluded.For more stories, go to themedialine.org