The key to survival right now (besides social-distancing and handwashing) is to ensure that the positive thoughts overwhelm the negative. 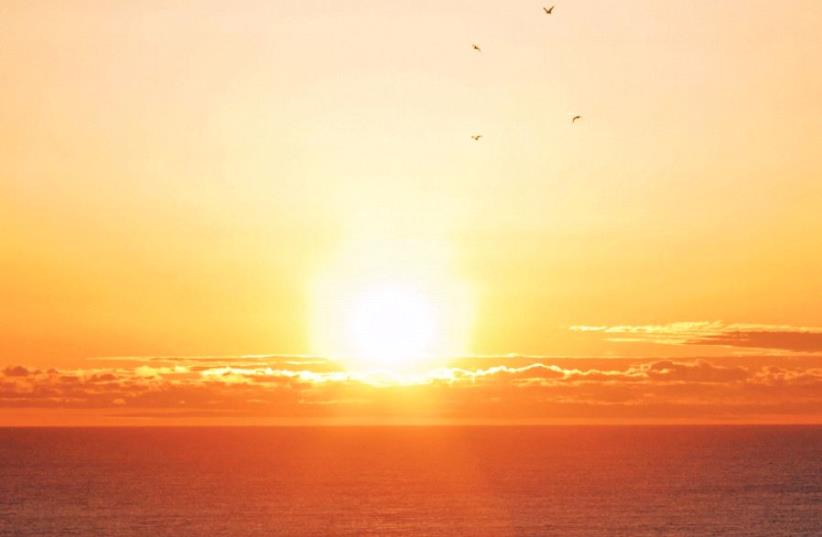 I have never been so in tune with nature.

Sitting “trapped” on my mother’s balcony in Florida from dawn till dusk (and beyond), I know that sunrise is at exactly 7:11 a.m., and sunset 7:38 p.m. I’ve learned that the sun does not rise and set at the same spot every day; it has been appearing slightly more to the north over the ocean in the early morning, and disappearing that way as well, now hidden by the tall condo building along the intracoastal. I see when the tide goes in and out, when the ocean is smooth as glass or the waves crash angrily along the shore (though more research and on-line learning will have to determine why that is so, and what weather conditions account for that - as well as for the strong winds that blow through the palm trees on some mornings, while other days the branches don’t dare move). I observe wildlife carefully, noticing what time of day seagulls, storks and loons - now making their way back north to my homeland of Canada - appear on the shore searching for food, and when lizards or iguanas or chameleons (note to self, more research - what’s the difference?) prefer to run around, rather than sit motionless under the shade of a leaf or car bumper.

I have never been so in touch with my own body.

Am I actually hungry now, or just eating because I’m bored or anxious? Am I nauseous because I’m ill, or because I just ate two bags of chips and a pint of Häagen-Dazs in front of the telly? Is the cough that just came out of my mouth wet or dry?  How do I tell the difference? And why was I coughing at all? (Oh, right, one of those chips went down the wrong way). Am I experiencing shortness of breath, or is my breathing irregularity due to the crazy thoughts racing through my head? Is my throat sore this morning, or is it actually my neck, having tossed and turned uncomfortably all last night? I’ve gained a pound, then lost two. My eyes are tired from too much screen time. My fingernails grow at a much faster rate than my toenails. Is that just mine, or everyone’s?

I have never been so in touch with my mother.

Granted, we got to know each other very well before this all went down, as I came here to Florida right before Hannukah (to keep an eye on the Snowbird).  But now that we are both here together past our “best before” date - and spending all day, every day, trying not to step on each other within the confines of a 75 sq. m. condo - we have reconnected in a way that neither one of us could have ever imagined. I can predict, within a 10-minute window, exactly what time she’ll get up in the morning. I know what days she’ll stay in her bedroom for her “beautification” sessions, even though at this point she is only doing it for herself (her endearing vanity at the age of 88 is an inspiration to us all). I know when her hip is nagging her, and when her arthritis is flaring up. I know when she is hungry, and what time of day she goes to the “nosh cupboard” for a pick-me-up: a little pretzel mix during Jeopardy, a handful of chocolate covered almonds (dark chocolate preferred!) during the 11 o’clock news. I can hear in her voice when she is feeling blessed and happy to be alive (thank God, most of the time, Mom is one of the most positive people I know); I can see it in her eyes when sadness and depression are kicking in, usually during the aforementioned news broadcast.

Side note: Mom - ironically, at this particular moment in history - is probably having the BEST time of her life. She is being “forced” to stay put in Florida, and not cut her trip short to get home to Rochester to clean, shop and cook for Pesach and the 20-plus children, grandchildren and great-grandchildren she hosts around the seder table. I am no longer on her case to schlep to the local seniors’ center for her biweekly exercise class. She can now pick up the phone any time of the day or night and actually get hold of any loved one she wishes to speak to, who are no longer at work, carpooling or running around doing errands or attending meetings. She has a son (that would be me) who anticipates her every move, and keeps her well-fed and well-companioned. Mom feels blessedly guilty that she is now having such a good time. And the truth of the matter is, I, too, feel blessedly guilty, for having so much quality time with such an amazing woman, who constantly acknowledges how much she loves and appreciates me.

I have never been so in touch with my community.

Or rather my communities, plural. There is our local community here in Hallandale, where individual actions are now scrutinized, judged, applauded and damned all day long. There is my community of friends and neighbors - not just in Toronto, but around the globe. Surprise, surprise, those of us who have avoided social media like the plague (hmm, probably should stop using that term for the time being) are now embracing it as their lifeline to the outside world, and I feel like I know more about who’s doing what, where and when than ever before. And the current situation also helps to clarify who true friends really are: who is sending an email just to check in and make sure everything is okay? Who is actually picking up the phone just because they are comforted by the sound of your voice?

And then there is the Jewish community. So tricky this, currently such a source of both intense disappointment and pride. How can one not feel angry and betrayed when much of the spread of this horrific disease originated with “my people”, who traveled and congregated (and who continue to travel and congregate!) with little regard for what it might mean for society at large. The blessings of our community quickly turned into a curse as yeshivas stayed open and shuls kept holding minyanim (when I think back to the Purim seudahs still being held right before the outbreak, my blood curdles).

And yet the Jewish community continues to be a source of pride, inspiration, comfort and solace. Various rabbis and the Jewish Federation have called to check in on my mother.  Emails have been coming through to ensure we are prepared for Pesach and the sedarim many of us will be leading - alone - for the first time. And the virtual meetups! From Zoom shiurim to on-line tehillim sessions to chat groups just so others won’t feel alone, we “People of the Book” have transitioned to “People of the Laptop” in spectacular fashion. It is difficult for a Jew to feel alone at this time of distancing and isolation.

And yes, now that I have put this all down in writing, I guess it’s safe to say: I have never been so in touch with my feelings.

Fear, anger, betrayal, guilt, happiness, love and gratitude are a cocktail of emotions that are being shaken and stirred in my brain all at the same time. As cliched as it may sound, I truly believe that the key to survival right now (besides social-distancing and handwashing, of course) is to ensure that the positive thoughts - and there are many - overwhelm the negative. So thank you, citizens of the world, for stepping up and caring about one another. Thank you, friends and relatives, for being there through thick and thin.

And thank you, Hashem, for the beautiful world you have given us, which I can still see, “trapped” on my mother’s balcony.